Our favorite grippy robot fist, the balloon filled with coffee grounds, has graduated from grabbing to throwing. Its developers at... 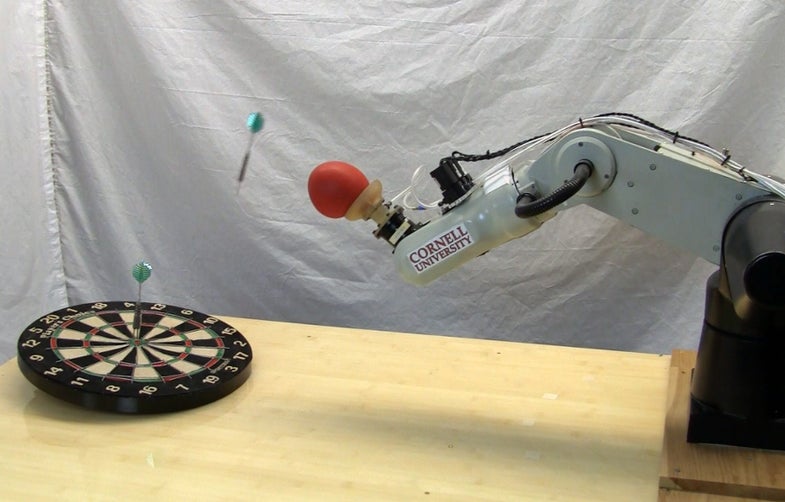 Our favorite grippy robot fist, the balloon filled with coffee grounds, has graduated from grabbing to throwing. Its developers at Cornell University and the University of Chicago have taught it how to hurl objects, from mini basketballs to darts.

Robotic hands that resemble our own can be elegant and useful, but they are expensive and tricky to make, which is why the Cornell/Chicago team developed the balloon fist instead. The Kinetic Object grippiNg Arm, or KONA, which we christened it when it was announced, conforms to the shape of whatever object you want it to pick up. The balloon presses down and deforms to fit the shape of the object, and then a vacuum removes the air from the balloon, solidifying its grip.

Its creators taught it to throw by reversing that process — rapidly re-filling the balloon with air. You might think this would cause a clumsy fumble as the carefully gripped object comes loose. You would be wrong.

While the game of darts is impressive, the shooting capability isn’t accurate enough — at least not yet — for KONA to go to work in, say, a factory. But it could be a new way to give a robot more range, like sorting objects, doing laundry. throwing away garbage or flicking helpless toy soldiers off a table.

This new ability was apparently an accident, by the way. According to the Creative Machines Lab at Cornell, the engineers were working with the gripper and running into problems with repeated gripping tasks, because the balloon would sometimes get stuck in its vacuum-packed state. They reversed the air pressure to move things along and found a surprising performance increase.

The gripper team is publishing a paper on their robot in the IEEE journal Transactions on Robotics.