Dogs and robots are both known for their search and rescue abilities, but each has its own flaws. Robots can’t... 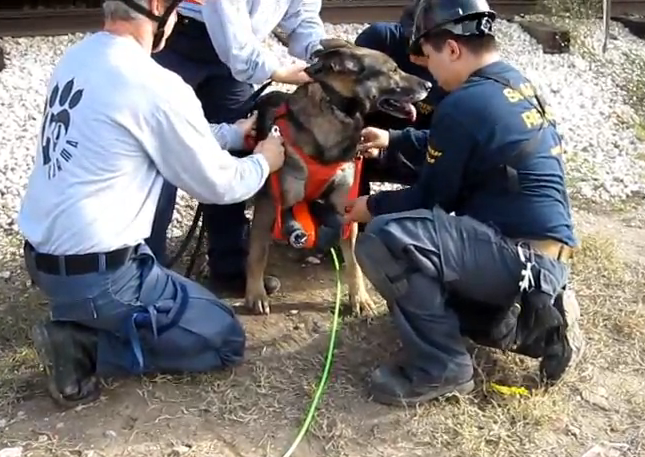 Dogs and robots are both known for their search and rescue abilities, but each has its own flaws. Robots can’t sniff, and other than barking, dogs can’t relay specific information about survivors. But put them together and you’ve really got something.

A new project at Carnegie Mellon’s Robotics Institute combines two of my favorite things, dogs and robots, to build an animal-machine rescue system that could conceivably improve a trapped victim’s survival odds after an earthquake or some other disaster. It would work by strapping a snakebot to a trained search-and-rescue dog, Saint Bernard collar-keg-style, and letting the dog loose to find survivors.

Once the dog finds a person, it’s trained to bark. The new system uses this training and programs the snakebot (or another rescue ‘bot) to deploy at the dog’s command. The snakebot could maneuver into spots that would be unstable or too small for the dog to reach, and relay video and/or audio of the situation to human rescuers on the other side.

Researchers at Carnegie Mellon University’s Biorobotics Lab teamed up with Ryerson University’s Network-Centric Applied Research Team (NCART) Lab for a demo of this system at a U.S. Department of Homeland Security demo. A well-trained rescue dog named Freitag found his “victims” and deployed a snakebot, using what CMU calls a Canine Assisted Robot Deployment system. Watch a video below.