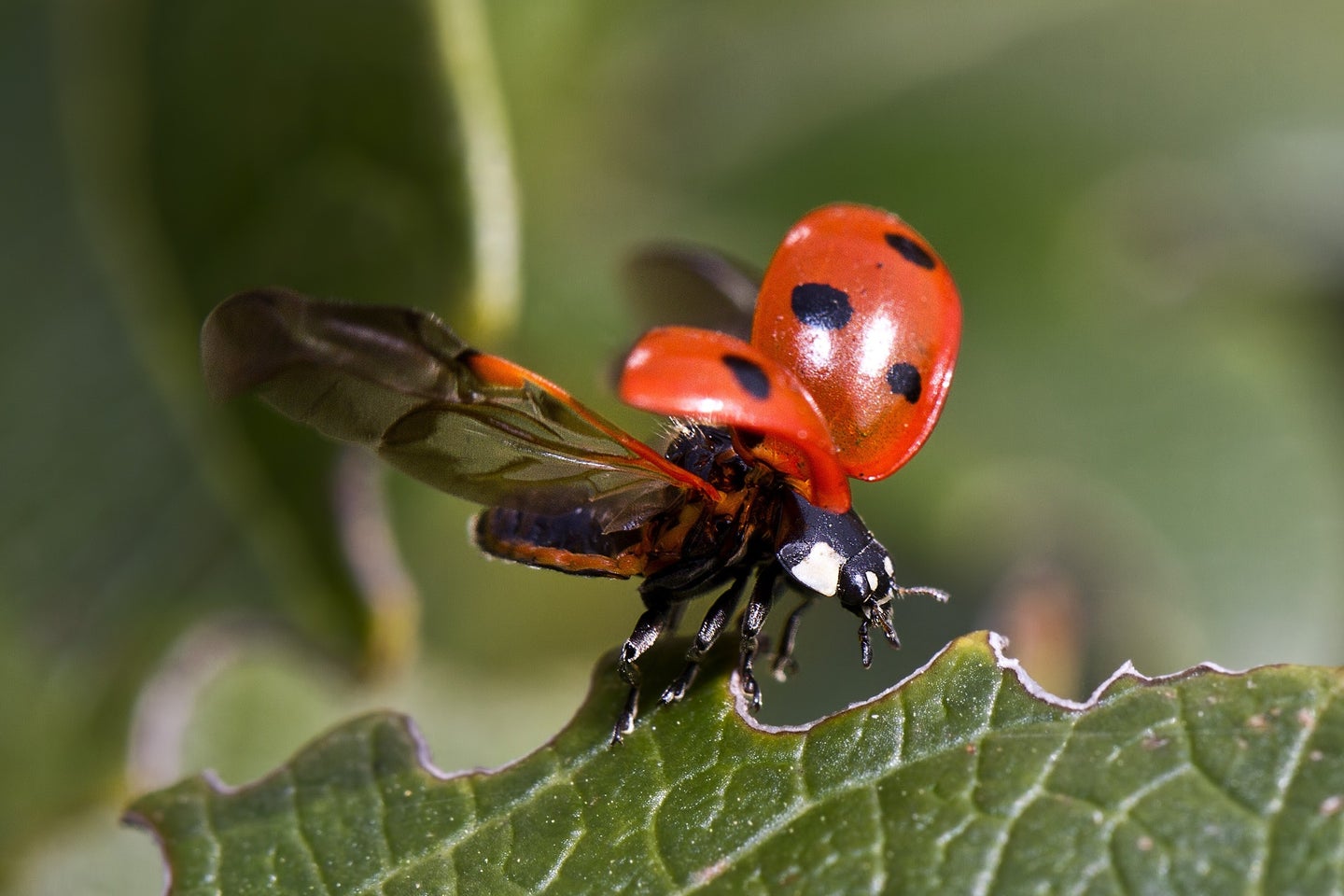 When a ladybug takes flight, its wings spring open within a tenth of a second—faster than a blink of an eye. And once unfurled, those wings remain open, allowing them to flap quickly without risk of folding or buckling.

These properties make the colorful little beetles a great source of inspiration for flying robots, says Kyu-Jin Cho, the director of the Soft Robotics Research Center at Seoul National University in South Korea. He and his colleagues have built robots that fly using a pair of wings that snap open and lock much like those of real ladybugs.

“We are trying to mimic the fundamental principle behind creating those motions,” says Cho, who described his work this week in the journal Science Robotics.

The wings his group designed are sturdy in flight, yet can be folded up like origami paper once the robot touches down. These lightweight, compact wings could make future versions of the robots ideal candidates for search and rescue or reconnaissance missions.

Ladybugs aren’t the only insects that keep their hind wings tightly folded when not in use. “But unlike the ladybird beetle’s wings, they don’t open up that quickly,” Cho says. Key to the insect’s swift takeoff are specialized veins in its wings with a slightly curved shape that allows them to store elastic energy while bent, then release it when the wings pop open. The curved veins also keep the wings stiff and steady while in flight, similarly to how a tape measure stays straight while extended.

“If you fold the tape measure…and then release it, it’s going to open up quickly,” Cho says. “It’s basically the same principle.”

He and his colleagues built 13-inch fabric wings with artificial plastic veins and attached them to robotic insects they’d previously designed to jump or crawl. The veins could unfold within 116 milliseconds and can carry up to 150 times their own weight without buckling.

“It naturally locks itself when it’s unfolded because of the curved shape, so it then can hold very heavy weights,” Cho says. “If it was just a flat surface it would bend immediately, but because it has this curved shape it’s much stronger.”

The researchers put one of the remote-controlled robots to the test by directing it to leap from a roof, whip its wings open in midair, and glide to the ground. They tossed the other robot off the second floor of a building; after gliding to earth, this robot refolded its wings and crawled along the ground. The team also found that the design could be adapted to make a robot with flapping wings.

This origami-inspired design isn’t the first of its kind. Other researchers have built similar devices with unfolding parts, including solar panels for spacecraft. However, these previous devices use rigid plates that cannot open very quickly. By creating wing frames that are curved when open and flattened when folded, Cho and his group departed from this mold.

“I think ours is the first one that can actually store energy and then open up really quickly by itself without extra components,” he says. “The structure itself is being used as a spring.”

This means that the ladybug-inspired wings can fold up neatly, making the robots more portable and easier for people or drones to carry. Once they are deployed, the robots would also be less noisy than traditional drones.

Around the world, researchers are building a menagerie of bio-inspired robots that fly like bats, insects, or birds.

“The application is not very new, but the way they are trying to integrate origami designs in this kind of bio-inspired robot is interesting,” says Alireza Ramezani, a roboticist at Northeastern University who is working on a robot with flapping wings called Bat Bot. “It’s promising in the sense that it would hopefully allow us to create bio-inspired robots that are less complex, lighter, and more responsive.”

However, origami robots also have some drawbacks, he says. They can only fold into a limited number of shapes, which restricts the movements that the robots can perform.

One particular advantage of the ladybug robot is that it can tuck its wings out of the way by folding them, enabling the robot to jump or crawl when it’s not airborne, Cho says. He plans to upgrade future generations of the robot to be controlled by artificial intelligence so they can navigate more autonomously.