It sounds like something out of a fantasy film: a vat of sand into which you plunge a small object... 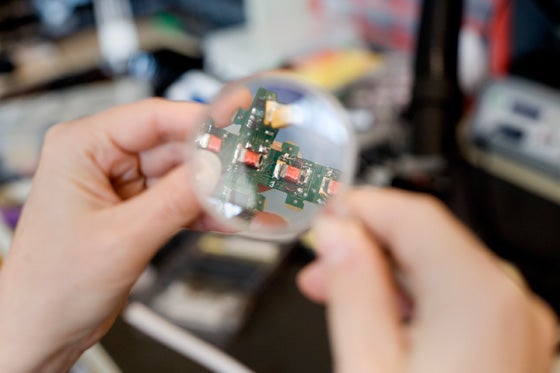 It sounds like something out of a fantasy film: a vat of sand into which you plunge a small object only to watch the sand bind together to form larger copies of the same object. Such “smart sand” isn’t exactly a reality just yet, but a team at MIT’s Distributed Robotics Laboratory (DRL) has a vision for tiny granules–“smart pebbles”–imbued with a small amount of computing power and covered in magnets on the outside. Piled together in a heap, the small amount of computing power in each grain would become a single distributed computing platform capable of shaping itself into objects, with the unneeded grains falling away to leave behind the finished product.

It would work something like this (there’s a good visual explainer in the video below): An object–a scaled down version of whatever the user wishes to create–is placed into a container of smart sand granules. The sand runs an algorithm that allows it to sense the shape of the object and map it in 3-D. The user specifies how big he or she wants the final product to be beforehand, and the grains simply scale the map of the object up to the desired size.

The grains then define the perimeter of the duplicate item within the pile of smart sand. The necessary granules bind together. The others do not. The user can then reach into the sand and pull out a scaled duplicate of the original item. The same algorithm can produce multiple copies of the same item. Or, if an item is not needed anymore, it can be returned to the pile and reused to make something else.

The team has demonstrated this in 2-D with smart pebbles measuring about 10 millimeters on each edge–far larger than what would be necessary to create nuanced shapes–with electropermanent magnets on four sides (electropermanent magnets are like eletromagnets that don’t need a constant charge; a single jolt of electricity switches them on and off). The challenge will be shrinking the granules down to smaller and smaller sizes while retaining the minimum amount of computing power (and electrical power) each pebble needs in order to keep the system functional.