Will People Alive Today Have the Opportunity to Upload Their Consciousness to a New Robotic Body?

A Russian mogul wants to make sure the answer is yes, and soon 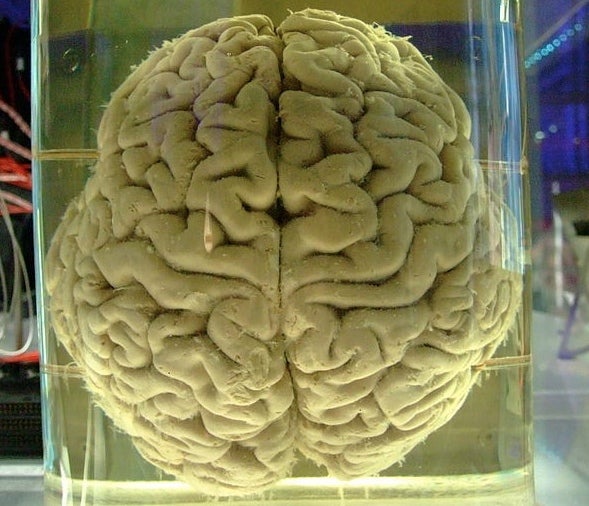 When Steve Jobs passed away last year, a joke bounced around–not that there was anything particularly funny about it–that the man who had done so much to shape modern technology hadn’t really died at all, but rather had figured out how to upload himself into the Mac OS so he could live on with us, and with his products, forever. The notion was ostensibly so far out as to be ridiculous. But not everyone sees it that way.

At the recent Global Future 2045 International Congress held in Moscow, 31-year-old media mogul Dmitry Itskov told attendees how he plans to create exactly that kind of immortality, first by creating a robot controlled by the human brain, then by actually transplanting a human brain into a humanoid robot, and then by replacing the surgical transplant with a method for simply uploading a person’s consciousness into a surrogate ‘bot.

He thinks he can get beyond the first phase–to transplanting a working brain into a robot–in just ten years, putting him on course to achieve his ultimate goal–human consciousness completely disembodied and placed within a holographic host–within 30 years time.

Pushing aside all the extremely difficult technological challenges for a moment, there are a couple of important to considerations tied up in Itskov’s vision. First, while the later phases of his project are so far out as to seem ridiculous, phase one is totally feasible (in fact it’s already being done). From there, the leap to phase two–human brainpower transplanted into a mechanical robot–is a quite a leap. But if we are willing to allow that it might be possible even within the next 30 years, then we have to consider a further possibility: that many people alive today–like the twenty-something author of this piece–could be confronted with this kind of technology in their lifetimes.

Which is terrifying and amazing and disconcerting all at the same time.

We’ve already started down the road toward shedding our corporeality.But is it even within the realm of possibility? Phase one–creating a robot controlled by a human brain–is already well within reach. In fact, DARPA is already working on it via a program called “Avatar” (which, incidentally, is also the name of Itskov’s project) through which the Pentagon hopes to create a brain-machine interface that will allow soldiers to control bipedal human surrogate machines remotely with their minds.

And of course there are all the ongoing medical prosthesis projects (DARPA is involved in a few of these as well) that have shown that the human nervous system can interface with prosthetic enhancements, manipulating them via thought. Itskov draws a clear arc from what we have now to the consciousness-containing holograms that he envisions. All we have to do is attack the technological obstacles in between, one at a time, until we get there.

If only it were that easy. But Itskov also makes a valid point. In the past decade alone we’ve witnessed brain-machine interfaces emerge from the realm of nascent, futuristic ideas to mechanisms firmly rooted in reality. There’s still so much we don’t know about the brain, but better technology (and an abundance of funding in this field spurred by the horrific neurological and extremity injuries inflicted on American soldiers in Iraq and Afghanistan) is expanding the envelope of possibility every year.

What Itskov is really saying–though in a very ambitious way–is that we’ve already started down the road toward shedding our corporeality via prostheses that interface with our nervous centers. If you can interface a brain with a hand, and then a brain with an entire arm, why not a brain with two arms? With two legs? With everything else? The question now is figuring out where the limitations lay–just how far down that road we can go.

And what a hypothetical road it is. Theoretically, as long as one could keep his or her gray matter from decaying, he or she could continue to “live” indefinitely (at least if you buy into the idea that our consciousness lives in the wiring of our neurons). Phase three of Itskov’s plan–dispensing with the physical brain and uploading consciousness directly to a computer or robot–does away with the organic matter entirely, making your consciousness as permanent as that CD-ROM version of Myst that still lingers in the bottom of one of your desk drawers. People as programs–paging Kevin Flynn.

Of course, there are myriad reasons why uploading human consciousness to some kind of computer won’t work, not least of which being the fact that every attempt we’ve made at creating a computer that functions just like the brain has come up far short. And creating a hologram that also contains that consciousness? We’re not seeing it–not in thirty years, not in this century. Still, progress is being made in neural networks, microchips modeled on living brains, and entire computers set up to mimic the brain’s functionality. We’ve built synthetic analogs for all kinds of organs. The brain is the most complex of all, but following a certain line of reasoning–the line Itskov seems to be following–it’s only a matter of time and determination before we deliver a neurological analog as well.

All that is to say that Itskov’s vision, while overly-ambitious (and we like overly ambitious here), is not as completely far out as it sounds–at least not the earlier phases. People that are today firmly connected to their living bodies, consciousness all bound up in their craniums, may within their lifetimes be presented with a choice. Call it selective corporeality. In the future, questions about mechanical immortality–do we really want to live beyond our bodies as “conscious” machines? Is a robot or computer driven by a living brain a person, with all the rights and privileges inherent therein? Can i get jets implanted in my robo-hands and robo-feet so that I can fly like Iron Man?–could become, to some degree, actual questions that we have to consider, this time non-hypothetically.

It’s more than my non-mechanically enhanced consciousness can even start to think about.