A coating for aircraft, bridges, and other structures could make it easy to detect unseen damage 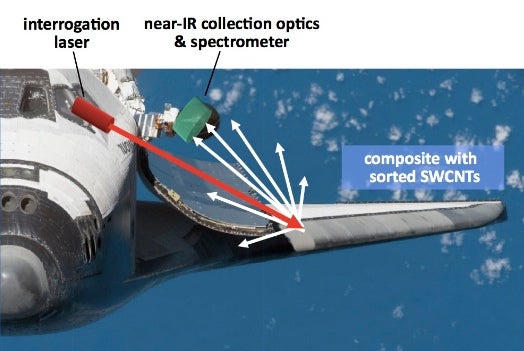 New kinds of coatings and sensors that can help engineers detect stress or deformation in structures abound, but most are limited by the scope of deformation they can detect and the need to be physically connected to an output device. Researchers at Rice University may have overcome these obstacles with a new kind of nanotube-packed “strain paint” that alerts engineers to compression and stress in an underlying structure by glowing under near-infrared light.

Conventional strain sensors like those embedded in the wings of aircraft are helpful but limited in their ability to generate a holistic picture of an aircraft’s structural integrity (the same goes for individual sensors placed on bridges or buildings). They typically convey strain in specific places and only measure stresses in specific directions. In other words, they only measure for the most common kinds of strain–they don’t account for the unknown unknowns.

The Rice strain paint can map stress across an entire area, in any direction, and without the inspector having to be extremely close to the object being inspected. It works via a long-ago discovered characteristic of semiconducting carbon nanotubes that causes damaged nanotubes to glow fluorescent in the presence of near-IR light. In the case of an aircraft wing, a coat of strain paint would glow under near-IR light anywhere that it was compressed or stretched by the underlying structure.

That means an aircraft inspector on the ground using a handheld IR spectrometer could create a strain map of an entire aircraft wing that shows stress at any location and in any direction, not just where a sensor is placed. Moreover, an aircraft wouldn’t necessarily have to be on the ground to be tested for structural integrity. Bruce Weisman, one of the researchers behind strain paint, has previously floated the idea to NASA that such a coating on spacecraft would allow astronauts (or automated systems) to inspect their exteriors for any structural damage while on orbit, before attempting atmospheric re-entry.

And of course this would all work for more static structures like bridges and tunnels as well. The strain paint isn’t yet ready for market, as there are properties of the paint that still need to be optimized in the lab. But here, the researchers say, there is further opportunity for improvement. Different kinds of strain paint could be developed for specific applications, allowing for both optimization of the strain detecting characteristic itself as well as the introduction of other properties to the paint. Think: Strain paint that is also anticorrosive for aircraft, or a stress-testing coating for spacecraft that’s also heat-shielding.