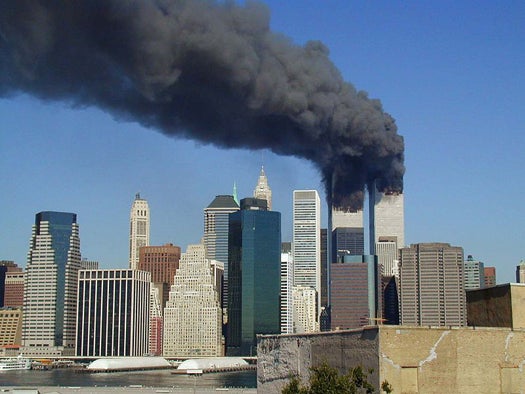 More than ten years after the fact, a scientists based at the Norwegian research institute SINTEF is proposing that a well-documented chemical reaction spelled the ultimate demise of the Twin Towers after the attacks of September 11, 2001. This isn’t another conspiracy theory, nor is it proven fact. But Christian Simensen theorizes that a mix of molten aluminum from the aircraft bodies mixed with water from the sprinkler systems could have catalyzed secondary blasts that brought the World Trade Center towers to the ground.

Simensen’s idea, presented at a materials technology conference in San Diego this week, is thus: after the planes impacted the WTC towers, tons of molten aluminum ran down into the floors below the impact sites, mingling with several hundred liters of water from the buildings’ fire sprinkler systems. This mix of aluminum and water is known to cause a chemical reaction that can not only boost temperatures but also put off combustible hydrogen in the process. Basically, it’s a recipe for a really hot explosion.

The official 9/11 report assigns blame for the collapsing towers to the steel structural beams at the building’s core. Basically, it says that these beams became super-heated by the jet fuel inferno created by the impacting aircraft, and that in turn caused the structures to fail.

But Simensen’s explanation is intriguing. It doesn’t dismiss the official report, but simply claims that it doesn’t tell the whole story. He says the aluminum industry has recorded more than 250 water-aluminum explosions since 1980, and that at one point aluminum maker Alcoa did an experiment involving just 44 pounds of molten aluminum and 20 liters of water (along with a small quantity of rust, which exacerbates the reaction). The resulting explosion destroyed the lab and left a 100-foot crater, he says.

That was under controlled conditions, but extrapolate that to the uncontrolled conditions inside the WTC towers just after the attacks. Jet fuselages contain roughly 33 tons aluminum alloy that melts at roughly 1,220 degrees, Simensen says, turning to a water-like liquid at nearly 1,400 degrees. When the aircraft hit, they exploded and were immediately trapped between floors where debris like plaster quickly melted around them, creating a kind of insulated oven that would push temperatures well north of aluminum’s melting point.

That melted aluminum would then have run down to lower floors, where sprinkler systems were pumping water onto the floors. Once mixed, water and aluminum would’ve immediately reacted, boosting temperatures to up to 2,700 degrees and putting off explosive hydrogen. Thus, just as the steel supports were weakening as a result of the spiking temperatures, the hydrogen blasts would’ve been strong enough and hot enough to blow out a section of the building. That confluence of factors could have easily led to the “pancaking” of the floors above that eventually brought the buildings to their horrifying ends.

Knowing next to nothing about aluminum-water reactions, we’re not out to endorse Simensen’s theory. But it does address some loose ends, like the appearance of explosions from inside the buildings as they began their final collapses. The half hour to 45 minutes that such an aluminum meltdown would require also is roughly consistent with the time elapsed between the impacts and the collapses, Simensen says (once again, we’re not endorsing said math, just reporting what he said).

At this point we’ll never really know what happened. All the same, it’s an interesting bit of chemistry to think about.