Along with its massive high-speed rail network, China has officially surpassed the United States in yet another piece of transportation... 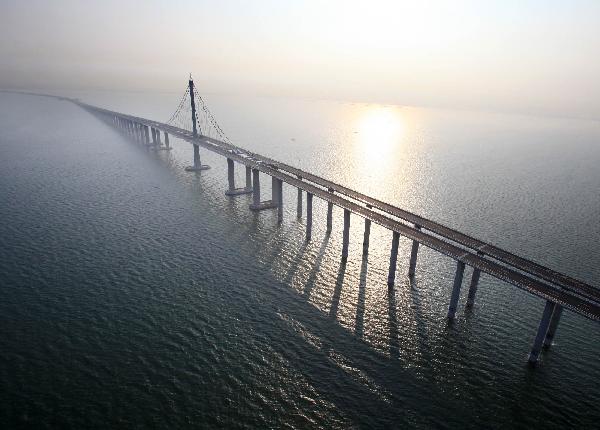 Along with its massive high-speed rail network, China has officially surpassed the United States in yet another piece of transportation infrastructure: the world’s longest sea bridge.

The new bridge spans Jiaozhou Bay, on the southern coast of China’s Shandong Peninsula in northeastern China. At 26.4 miles long, it beats Louisiana’s Lake Pontchartrain Causeway — the previous world-record holder — by at least 2 miles, according to the Guinness Book of World Records.

Chinese workers toiled at marathon pace to build the bridge in four years, starting at each side and meeting in the middle. The structure has 5,200 pillars and cost at least $2.3 billion, according to Chinese state-run media.

The Guinness officials say the bridge is earthquake- and typhoon-proof, and designed to withstand the impact of a 300,000-ton vessel. It links the port city of Qingdao to the island of Huangdao, cutting drive time from 40 to 20 minutes, according to the state-run China Daily.

The New Orleans Times-Picayune reports that Americans are apparently not giving up the world’s longest title without a fight, however. The newspaper talked to Carlton Dufrechou, general manager of the Lake Pontchartrain Causeway, who pointed out that the Jiaozhou bridge has a bend in it, and that the over-water length is only 16 miles, compared to 24 for his bridge.

“Bunch of wannabes,” he said. Read the Times-Pic’s piece for his full take, in which he calls the Chinese news “propaganda.”

In any case, the bridge looks pretty neat, especially set to this haunting soundtrack. Check out some aerial views below.