Viral marketing agency Thinkmodo has been bringing sci-fi to life in the skies over New York City for the past... 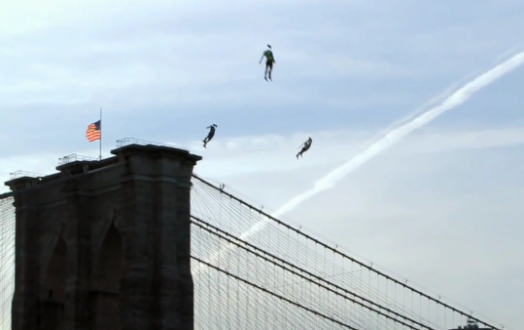 Viral marketing agency Thinkmodo has been bringing sci-fi to life in the skies over New York City for the past couple of weeks, so if you thought you saw something out of the ordinary in the past few days–like perhaps a few people lazily looping around the skyline like superheroes–no need to adjust your medication. To promote an upcoming film, the agency custom built three remote controlled aircraft shaped like humans and put them in the air over New York and New Jersey.

The three main characters in 20th Century Fox’s upcoming film Chronicle have the ability to fly, so Thinkmodo thought the best was to build hype around the film would be to create some “flying people” sightings around NYC. So far, so good. Local news stations picked up the story, and a video the team released documenting the campaign (see it below) has garnered well more than half a million hits as of this writing.

Viral marketing can be so absolutely boring, but a gnarly RC airplane hack for the sake of sci-fi? Consider our hats tipped.