Because we’ve all been asking for it, Orbotix was nice enough to drop off one of their Sphero robotic balls... 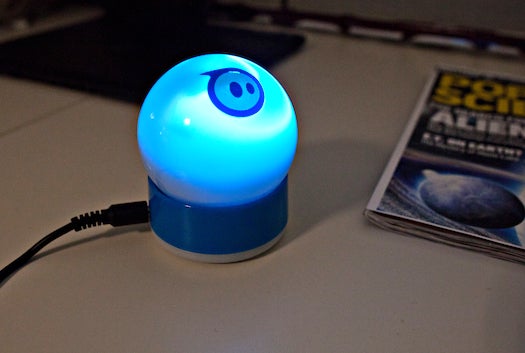 Because we’ve all been asking for it, Orbotix was nice enough to drop off one of their Sphero robotic balls (ball-shaped robots? Ball-bots? Spherical robots?) at PopSci HQ, and we’ve been playing with it (read: driving it into our boss’s office and giggling) ever since. It’s an alpha model, and Orbotix is making lots of tweaks to the product before it actually hits the market, but here are our impressions–and some video of the endearing little guy in action.

Creating a spherical robot that can move in any direction is a surprisingly difficult task. But Orbotix, the creators of Sphero, have created an air- and water-tight sphere equipped with something like a gyroscope inside that can shift weight to any part of the sphere, enabling it to move in any direction. At the moment, the Sphero can be controlled with any of a number of apps for Android and iOS. Orbotix has created an open API, so anyone can develop their own app for the platform.

So what can you actually do with the thing? There’s an app that lets you draw a shape that the Sphero will replicate with movements. There’s one that’s some kind of accelerometer-based golf game, where you swing the iPhone like a golf club and the ball moves (we could never get this one to work, though again, see disclaimer). There will eventually be games that use the phone’s camera for augmented reality games–imagine a virtual labyrinth, or virtual pong, using a real ball. And that’s just the start of what the Sphero might be capable of.

Physically, the ball is about four inches in diameter, about the size of a baseball. It’s charged with a nice little inductive cradle, using the same technology as Palm’s Touchstone or some electric toothbrushes, which means you just plop the Sphero in the cradle to charge, no wires necessary. You wake it up by giving it a firm shake (like, harder than you’d shake something that’s alive), and it’ll pulse colors to let you know it’s up. Oh, about those colors: you can choose the color it glows from a pretty huge spectrum, right from the smartphone app.

Embedded in the Sphero is a Bluetooth antenna, so its range is about the range of Bluetooth–60 feet or so–although we found that in our crowded and gadget-laden office, that range was more like 30 feet. (Again, this is an alpha version, and according to the Sphero blog, they’re making major improvements all the time in its responsiveness.) When using the app, you have to first center the Sphero, meaning you have to tell it which way is up (or, more accurately, which was is “forward”). That’s easy to do–there’s a little dial that moves a blue light in the Sphero, and when the light’s pointing at you, it knows that moving directly away from you is “up.” You can control it in a number of ways; the app gives options for joystick, accelerometer-based, and classed RC control layouts.

So how’s it work? We have to say, this thing is surprisingly fun. The controls work pretty well (though it does sometimes get confused after it collides into objects, which it definitely will) and we never quite got over that little-kid glee of hiding behind walls (in this case, cubicle walls) and sending this cheerful little blinking ball into offices and conference rooms. We’re really looking forward to seeing what developers can do with it, but more importantly, we’re really looking forward to seeing how our cats react to it. It’ll be released in the coming weeks and cost $130 (the apps are free).