Nanotechnology as a discipline is bleeding-edge cool, but so often we hear more about its amazing potential than its practical... 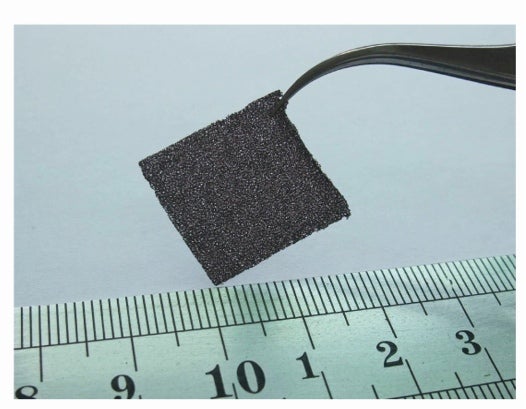 Nanotechnology as a discipline is bleeding-edge cool, but so often we hear more about its amazing potential than its practical application. So it’s always refreshing to catch wind of a story like this: Researchers at Rensselaer Polytechnic Institute in New York have developed and demonstrated a small, relatively inexpensive, and reusable sensor made of graphene foam that far outperforms commercial gas sensors on the market today and could lead to better explosives detectors and environmental sensors in the very near future.

The new sensor dispenses with a lot of the limitations that have been holding back sensors in this space. In the last several years, many strides have been made in the science of manipulating nanostructures to be excellent detectors of very fine trace elements of chemicals on the air. But these sensors, while great in theory, are impractical in actual service.

Current sensor designs are complex, often relying on an individual nanostructure that must be carefully manipulated and even more carefully analyzed. They are often not reusable and must be deployed at specific temperatures or pressures, making a handheld sensor device unreliable, very expensive, and impossible to use repeatedly.

Enter graphene foam. The new postage-stamp-sized sensor developed at RPI involves growing graphene–one-atom-thick layers of carbon–on a structure of nickel foam. Removing that nickel foam leaves behind a structure of foam-like graphene with unique electrical properties that can be tuned to the task of sensing.

When exposed to air, particles adsorb to the foam’s surface. And each of these particles affects the graphene foam in a different way, slightly modifying its electrical resistance. Run a current through it, and a measurement of the change in resistance tells a you what’s sticking to the foam. Moreover, by running a roughy 100-milliampere current through the foam the RPI team found they could cause the particles to desorb–that is, they unattached themselves from the sensor, cleansing it so it can be used again and again.

Tweaked to detect ammonia (a key ingredient in homemade explosive ammonium nitrate–think: fertilizer bombs), the graphene foam sensor managed to detect the offending particle at just 1,000 parts-per-million in just five-to-10 minutes–making it ten times more effective than the best detectors on the market today. A second demo involving nitrogen dioxide (another trace element given off by explosives as they degrade) showed nearly identical results–effective at 100 parts-per-million, or ten times better than current commercial sensors.

Given that graphene foam is fairly easy to handle and manipulate given its larger size and room-temperature-ready performance, that’s pretty remarkable. It also drastically lowers the barrier to a practical handheld devices for atmospheric sensing. See more straight from the source in the vid below.