Another week, another scheme to clean up our bourgeoning space debris problem. This one, like many before it, calls for... 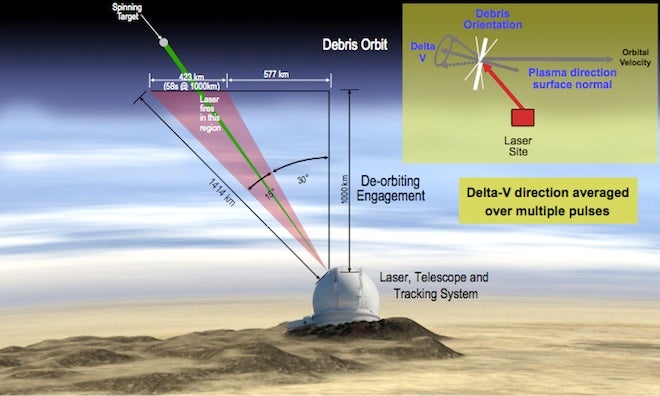 Another week, another scheme to clean up our bourgeoning space debris problem. This one, like many before it, calls for a powerful ground-based laser to remove orbital debris from low earth orbit. Using high-powered laser pulses fired from the ground, the system would create a small plasma jet emanating from the piece of junk itself, essentially turning each piece of debris into its own laser-powered rocket that would remove itself from orbit.

The system, detailed in a paper released on arXiv last week, would rely on technologies already available or already under development. And unlike other ground-based laser systems proposed in past decades, it would be able to tackle both large and small pieces of space junk. A 33-foot telescope should do the trick, and a powerful enough laser isn’t out of reach, the authors of the paper claim.

Essentially, the heat from the laser–which would have to be targeted very precisely to intercept these extremely small objects whipping around the sky at many thousands of miles per hour–would vaporize a small part of each piece of space junk. The heat would be such that a small plasma jet would form, basically turning that piece of the space junk into fuel for a small jet that would push the debris out of orbit. Small piece of debris would burn up as their orbits decayed. Others would need to be carefully nudged out of orbit such that they end up landing in the Pacific Ocean.

The authors argue that a ground-based laser would obviate the need to launch any space junk-clearing spacecraft into orbit, which would cost hundreds of millions of dollars. Small pieces of junk could be cleared this way for a few thousand dollars. Larger pieces might cost up to $1 million.

Of course, laser-based approaches have been rejected out of hand previously based on the idea that they might also be used to target satellites in space during periods of hostilities. This scheme is likely headed for a similar fate. But at least someone is thinking about the problem, which as you read this is growing unchecked.