Researchers looking for signs of life elsewhere in the universe often start by looking for one key ingredient necessary to... 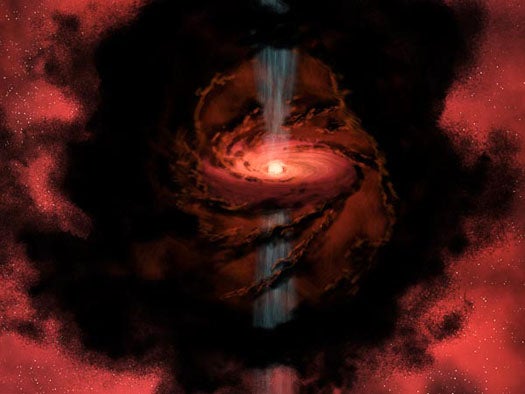 Researchers looking for signs of life elsewhere in the universe often start by looking for one key ingredient necessary to complex life as we know it: water. And just 750 light-years away, they’ve found quite a bit of it spewing from the poles of a young, sunlike star that is blasting jets of H2O into interstellar space at 124,000 miles per hour.

The star was discovered by ESA’s Herschel Space Observatory, whose eyes were able to pierce the dense cloud of gas and dust that is feeding the star’s formation. There, Herschel saw light signature indicative of hydrogen and oxygen, and in following those traces found that these atoms are forming water on and around the star. But as the molecules move through the star and are injected into the massive jets of gas spewing from the poles, the heat and pressure vaporize the water into jets of gas.

Only when the gas jets are far enough away from the star do they rapidly cool and turn back into liquid. At this point, the water droplets are essentially bullets of water moving something like 80 times faster than the average round fired from a rifle. And there’s a lot of them. The amount of water ejecting from the star is equal to the amount that flows through the Amazon every second, researchers say.

Astronomers think this water-spewing stage is short, but that it is also something every protostar goes through. If so, that means water could be scattered all over the universe. And that’s an interesting thought indeed.