If you want to see what Earth looks like from space, become an astronaut (or, barring that, a space tourist).... 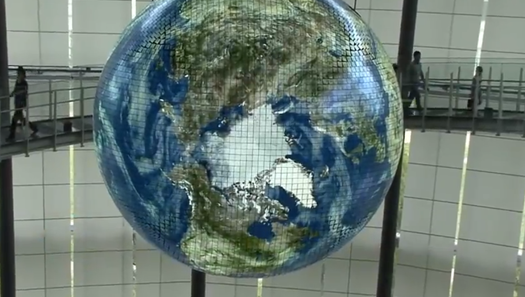 If you want to see what Earth looks like from space, become an astronaut (or, barring that, a space tourist). For the next best view, pay a visit to Tokyo’s National Museum of Emerging Science and Innovation where a massive, nearly 20-foot spherical OLED orb–the world’s first large scale spherical OLED–offers a satellite’s-eye view of the planet in super high resolution.

“Geo-Cosmos” is made up of 10,362 OLED panels that display continuously-updating satellite footage of our tiny blue marble, representing what our planet looks like from space in something close to realtime. It replaces an earlier model covered in LED panels, offering museum-goers a full 10 million pixels, a resolution 10 times greater than its predecessor.

And like any good museum exhibit, Geo-Cosmos is interactive. Touchscreens surrounding the globe allow viewers to tap all kinds of earth science data streaming in from all over the world, like simulations showing the origin of the March 11 earthquake that devastated Japan and the dispersion of all of that energy via tsunamis that reached all the way around the Pacific. See it for yourself below.