Student Designers Design a Tent Perfect for Camping Out on Mars

A team of student engineers at North Carolina State University is planning for a camping trip way off the beaten... 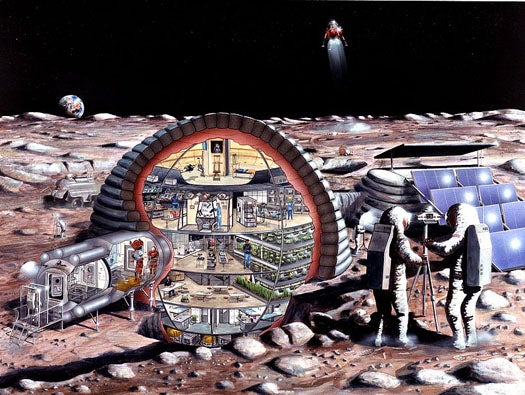 Inflatable space habitats aren't a new concept--the one above was designed as a lunar base--but a team from NCSU has made some leaps forward in textile and aerospace engineering to create what they think could be the perfect tent for future generations of explorers making camp on Mars. NASA
SHARE

A team of student engineers at North Carolina State University is planning for a camping trip way off the beaten path. Meshing textile and aerospace engineering know-how, the team has created an inflatable, tent-like habitat tough enough to protect astronauts bedding down on the Martian surface. They’ve even built in a lightweight Sabatier reactor that can produce water, fuel, and oxygen from Mars’ carbon dioxide-rich environment.

The challenge was to build a lightweight, collapsable structure that–unlike NASA’s current range of spacefaring materials–isn’t heavy, rigid, and voluminous. The 1,900-square-foot living space the team designed is a blend of materials that includes Demron, a commercially available textile used in various radiation- and heat-proof hazmat implements (nuclear workers cleaning up Japan’s current radioactive mess are wearing the stuff).

A polyurethane substrate gives the material rigidity when inflated, and a gold-metalicized film that reflects UV rays provides additional protection. The habitat’s dome shape is also optimized to repel the incoming meteorites that regularly pelt the Martian surface.

Perhaps more importantly, this Mars habitat will integrate a better, more spaceworthy Sabatier reactor than the ones currently used in space (the Sabatier process involves using a nickel catalyst to cause a reaction between carbon dioxide and hydrogen at high temperatures that produces water and methane).

There is currently a Sabatier reactor aboard the International Space Station, but it includes long, weighty tubes filled with nickel pellets–hardly ideal for packing on a deep space journey where every pound must be accounted for. The NCSU team’s answer: a nickel nanoparticle coated fiber material that can still create the reaction without the bulk and weight of those tubes.

Though it will be decades before such a tent might be pitched upon Martian terrain, the student team is wasting no time getting their technologies in front of the people who can help get it there. They will present their inflatable habitat to the NASA-sponsored RASCAL (that’s Revolutionary Aerospace Systems Concepts Academic Linkage) competition next week.

[NCSU via the Register]