It was only a matter of time before monkeys, like their hairless primate counterparts, became the target of advertising. Laurie... 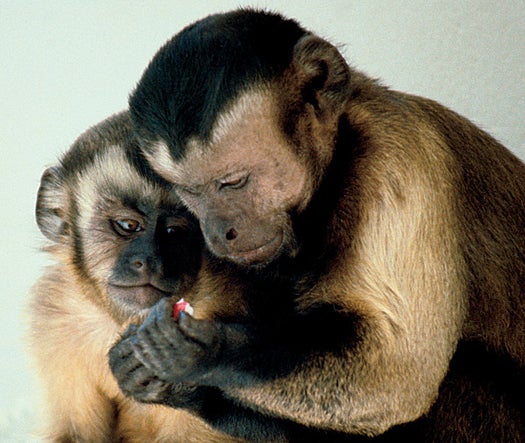 It was only a matter of time before monkeys, like their hairless primate counterparts, became the target of advertising. Laurie Santos, a primatologist at Yale University who was included in PopSci’s Brilliant Ten in 2007, is partnering with advertising executives Keith Olwell and Elizabeth Kiehner to create an ad campaign aimed at brown capuchin monkeys.

The team hopes to determine if the presence of advertising will change a monkey’s preference between two similar foods.

Santos’ monkeys have already demonstrated that they understand the concept of money, and behave similarly to humans when making economic decisions. The monkeys will have a choice between two brands of the same food (perhaps two different colors of Jell-o), one of which will be advertised by a billboard outside their enclosure.

But there will be no fancy slogans or slick pop culture references here, which would be lost on the monkeys anyway. This experiment gets down to what advertising is really all about: sex and power. One version of the billboard shows a female monkey’s exposed genitals next to the brand logo, and the other shows the alpha male capuchin next to the logo.

The experiment kicks off sometime in the next few weeks, so it remains to be seen if the advertisement will affect the monkeys’ preferences.