If you can't drive it or shoot 10-foot flames from it, it's not a grill 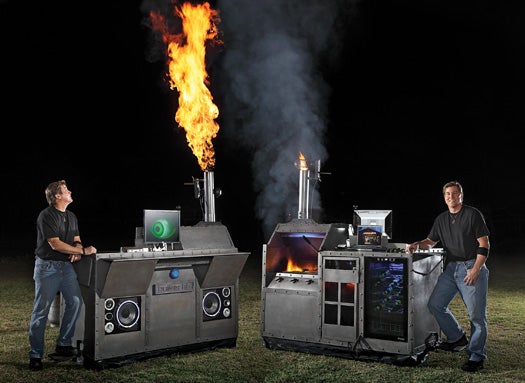 Lance Greathouse does not follow football. It wasn’t until last fall, at an Arizona Cardinals game, that the Phoenix dental-laser repairman, who harbors a severe DIY robot-building habit, was introduced to the art of tailgating. There, he spotted cars packed with grills, plasma screens, refrigerators and more. “But I never saw anything that was all-in-one,” he recalls. So he decided to create the ultimate tailgating rig: a fire-spewing, beer-chilling machine that he can drive from one parking-lot party to the next.
Click here to see how Greathouse’s great invention works.

When Greathouse thinks up a project, whether it’s an electric wheelchair with faux machine guns or a talking remote-control robot with a skeleton’s head and torso, he doesn’t start with sketches or computer-aided design. He dives right into fabrication. For the tailgate rig, he started by gathering the parts: a used grill from Craigslist, an inexpensive wine refrigerator, a discarded flat-screen monitor, an electric wheelchair, and a whole mess of steel tubing and steel plates. Once he imagined how it could all come together, he built a frame out of steel. He set the wheelchair’s driving wheels at one end and freely spinning wheels at the other and fit a joystick that drives the rig into a recessed panel above the fridge.

The grill and fridge sit at opposite ends, and Greathouse installed the controls for the electronic components in between. The rig has neon light effects on the front, a satellite stereo, an MP3 player, 250-watt speakers, a camera that displays tailgaters on the TV screen, and a second camera that relays a video feed of what’s cooking under the grill hood to a laptop. For fun, he added a steel cylinder that shoots fireballs into the air. A battery-powered inverter runs it all when there isn’t an available generator to plug into.

Greathouse has used the rig in a friend’s backyard, but he is eager to show it off at a game. When he does, he won’t be sitting still. “Instead of being stuck in one place,” he says, “I’ll take the party wherever I want.” 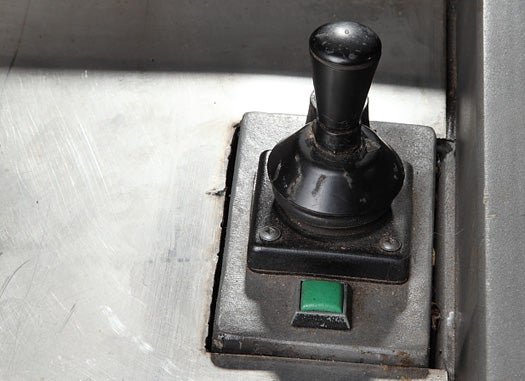 To put the 350-pound tailgate rig into driving mode, Greathouse folds up a metal tray at the fridge end, which opens the recessed panel containing the joystick and releases a small platform at the bottom for the driver to stand on. The rig moves around like a standard electric wheelchair: The joystick controls the driving wheels while the rear ones spin freely, letting the driver move forward, backward, left or right. 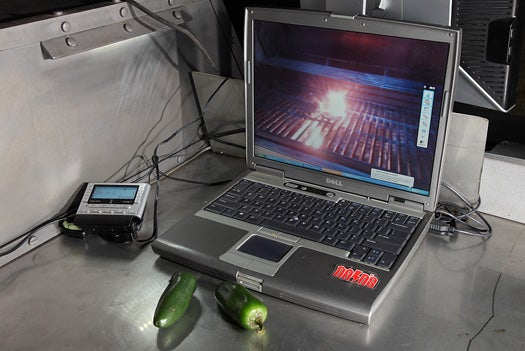 Greathouse doesn’t need to worry about theft while he’s inside the stadium watching a game. The flat-screen monitor, which faces away from the cook and typically shows live video of the onlookers, drops down and locks inside the frame. Large steel panels, which double as trays when folded up, drop and lock to secure the stereo and other electronics. 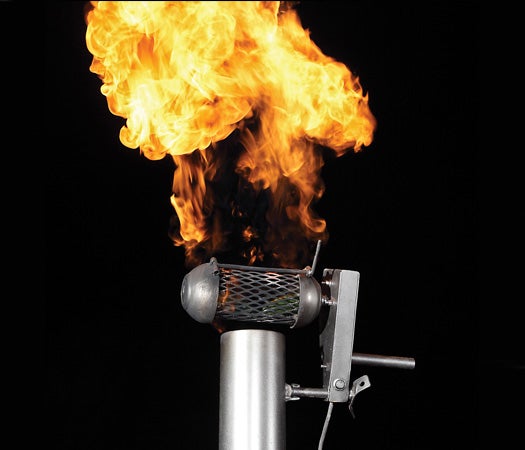 Greathouse loves to incorporate fire in his projects. On the tailgate rig, a three-foot-tall steel smokestack shoots out flames from the grill. At the top, he added a metal basket that he uses to roast green chiles, an Arizona favorite. To prevent them from burning, he rigged an electric motor from a car’s power window to rotate the basket. But when he wants to send out the dinnertime signal, he presses a button that releases a burst of gas from a propane cylinder, puffing a 10-foot-tall streak of dragon’s breath into the air. 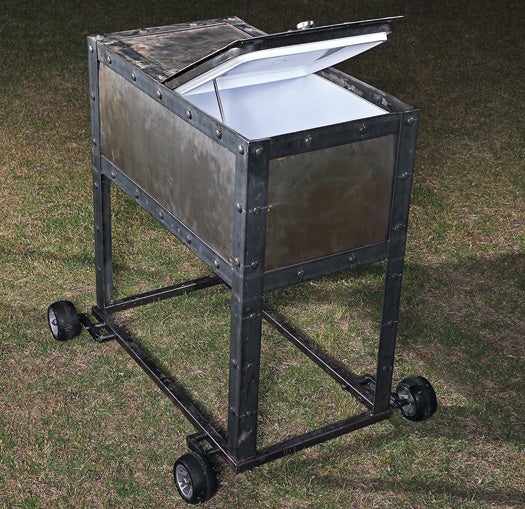 Greathouse decked out a standard cooler in steampunk-inspired metal panels and rivets and added wheels, the motor from one of his old robots, and an R/C car controller so he can drive it from afar. Using the controller, he can steer the cooler over to a friend, open the lid, and offer a beverage.
cameras
DIY
fires
flames
flat screen tvs