Video: A Built-In Eye Tracker Makes A Projection Screen You Can’t Look Away From

By connecting a pico projector and an eye-tracking camera, students from the University of Texas at Austin have created a... 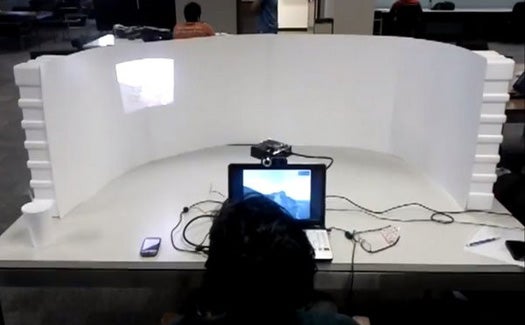 By connecting a pico projector and an eye-tracking camera, students from the University of Texas at Austin have created a virtual reality gaming setup in which the player cannot tear their eyes away from the action – literally.

The pico projector is motorized, so as the camera tracks a player’s line of vision, the view of the gaming world shifts to follow their gaze. It does not require them to hold anything, or have anything attached to them. The students have tested the system with a first-person shooter game, which this system seems perfectly suited for, as well as a flight simulator where the player controls the pitch and roll of an aircraft by moving their head.

In this early stage of development, players have to sit precisely in front of the eye tracker in order for it to work. Not to mention the display looks a little meager at this point. However, with time and a little work, this system could allow for the next generation of Kinect-like gaming to be even more immersive.