IBM researchers have built the first integrated circuit based on graphene, a breakthrough the company says could herald a future... 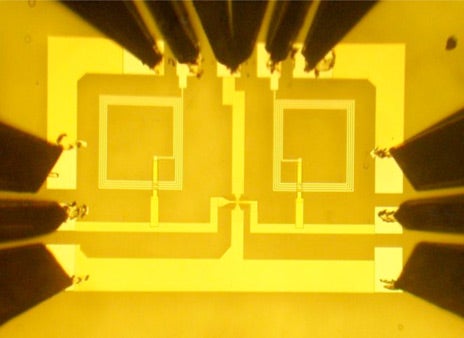 IBM researchers have built the first integrated circuit based on graphene, a breakthrough the company says could herald a future based on graphene wafers instead of silicon. The circuit, a 10 gigahertz frequency mixer, could give wireless devices greater range. At higher frequencies, the technology could someday allow law enforcement and medical personnel to see inside objects or people without the harmful effects of X-rays, according to IBM.

The circuit was built on a silicon carbide wafer and consists of graphene field-effect transistors. Last year, the same IBM team demonstrated the first graphene-based transistor, capable of operating at 100 GHz, but this time they integrated it into a complete circuit.

The circuit is a broadband radio-frequency mixer, which, as IEEE Spectrum explains, is a crucial component of radios. It creates new radio signals by finding the sum and difference between two input frequencies. IBM’s circuit performed frequency mixing up to 10 GHz, and worked well up to 257 degrees F. The research team believes it can get even faster — if so, chips like these could improve cell phone and transceiver signals, possibly allowing phones to work in spots where they currently can’t receive service, the company says.

Several teams have been working on graphene transistors and receivers, but it has been difficult to marry the single-carbon-atom sheets to the metals and alloys used on chips. This circuit also uses aluminum, gold and palladium, for instance, which do not adhere well to graphene. What’s more, graphene can be easily damaged in the etching process, as Yu-Ming Lin and colleagues at IBM’s Thomas J. Watson Research Center explain in a paper about the new circuit.

The team figured out a new process that clears those hurdles by growing graphene on the silicon face of the silicon-carbide wafer. Then they coated the graphene in a polymer, conducted the necessary etching, and removed the polymer using some acetone. The transistor gates are only 550 nanometers long, and the entire wafer is the size of a grain of salt, IBM says.

It will still be a while before graphene FET chips start taking over Silicon (Graphene?) Valley, however. The IBM team already has a few ideas for improving next-generation designs, including the use of different metals that don’t degrade graphene’s superb electrical conductivity.

The research is reported in today’s issue of the journal Science.