The Predator tracking software, as any good predator should be, is an incredibly keen hunter. Once shown any object, such... 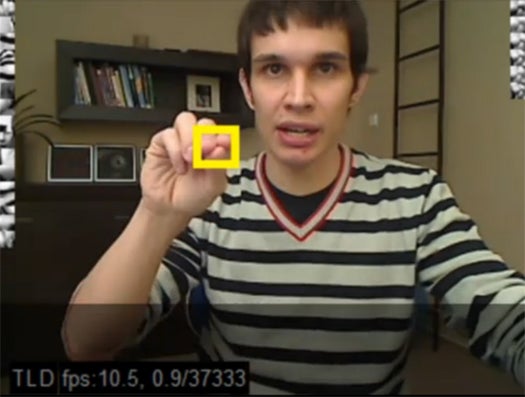 The Predator tracking software, as any good predator should be, is an incredibly keen hunter. Once shown any object, such as a face or a car, the camera learns to recognize and follow the object with frightening accuracy.

The algorithm was developed by Zdenek Kalal, a PhD student at the University of Surrey in England, who we can see rolling around on his desk chair in this video demonstration of the camera’s tracking abilities. After selecting something for Predator to focus on with a bounding box, the system begins recognizing patterns, learning how that object looks at different distances and angles, and even finding it amongst a sea of similar objects. When Kalal tells Predator to track his face, it is able to pick him out of a page full of small photos of other people.

Kalal does an excellent job of explaining the potential uses for the technology, moving beyond the obvious implications for security and identifying criminals. The video demonstrates how you can use the algorithm to track animals, stabilize videos by focusing on one object, or even create a makeshift mouse as the system tracks your fingers.

[University of Surrey via Wired]