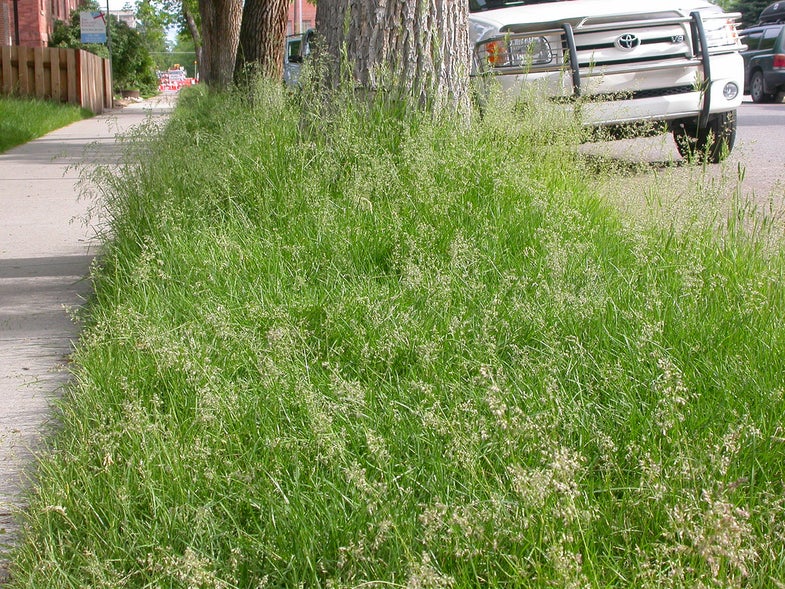 A new genetically engineered grass variant won’t be subject to federal regulation, because it was modified with a gene gun rather than bacteria, according to the U.S. Department of Agriculture.

The new strain of Kentucky bluegrass will likely be growing on American lawns very soon, where it will withstand prodigious amounts of the herbicide Roundup. The decision has provoked concern about a new generation of suburban superweeds.

As regular readers are aware, many American food crops are already genetically modified to resist Roundup, a broad-spectrum herbicide developed by the chemical and seed company Monsanto Co. The insertion of a special gene confers resistance to glyphosate, the active chemical in Roundup, which allows the chosen plants to proliferate while the weeds die.

But like bacteria evolving to fight antibiotics, weeds that are genetically predisposed to withstand it have been growing in increasingly large numbers. Now populations of Roundup-resistant “superweeds” have become such a problem that Monsanto gives farmers subsidies to spray other weed-killers along with Roundup. Several advocacy groups have cried foul over this recent USDA decision — announced late on a Friday before the holiday weekend — and claim it could yield new superweeds.

And it could lead to Roundup-resistant bluegrass growing where it’s not wanted, Norman Ellstrand, a plant geneticist at the University of California-Riverside, told Wired.com.

“If this plant grows and flowers at the same time as other bluegrass, they’ll flourish. You’ll have a new incidence of herbicide resistance getting into the wild.”

A government review would normally address questions like these, but there won’t be one.

This comes on the heels of another controversial USDA decision that said biotech companies could perform their own safety evaluations.

And it comes along with a report that Roundup, designed to interrupt plants’ growth cycle, is probably killing more than just weeds. Roundup is killing vast swaths of milkweed, an essential food source for the monarch butterfly, the New York Times reports.

Entomologists have been reporting for a few years that monarch numbers are on the decline, and a new study argues Roundup may be partly to blame. There is no data to support this allegation directly, however, but it’s another argument in the GM debate.

Typically, a new glyphosate-resistant plant has to go through a lengthy and costly review process. Seed companies say this prevents good products from getting to market. Opponents of genetically modified plants say the government should provide even more oversight. This argument has prompted lawsuits in the past and even sparked a tug-of-war between farmers and the federal judiciary that briefly imperiled the country’s sugar supply.

But in this case, the makers of the GM bluegrass, Scotts Miracle-Gro, used a different method to produce the desired new trait, and this means the grass doesn’t need the same review. (Scotts Miracle-Gro and many other seed suppliers license the Roundup-resistant gene from Monsanto.) 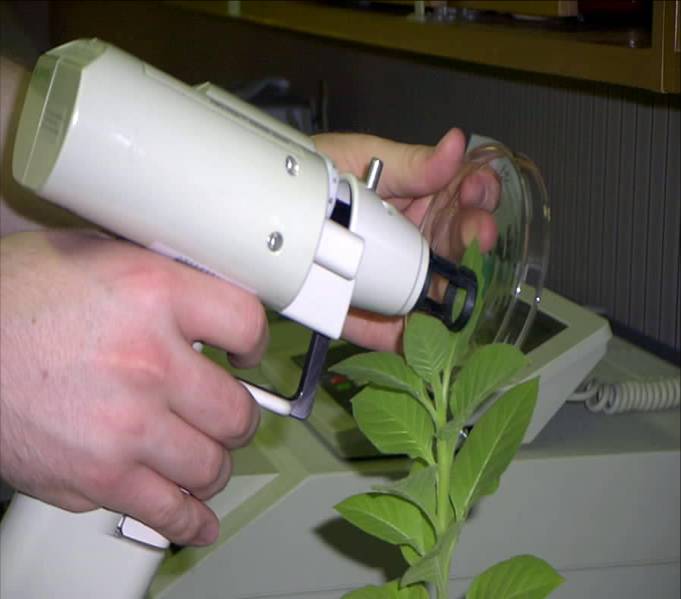 A gene gun bombards a plant with a small metal particle coated with plasmid DNA. Many of the targeted cells will die, but some that survive will incorporate the invading DNA into their genetic codes. Monsanto no longer uses gene guns, switching several years ago to a targeted gene insertion process involving a strain of bacteria. Other biotech companies still use them. [image via Marshall University]

When a company wants to introduce that gene, or any other, there are a few ways to do it. Click here to read our full-length description of the process. But essentially, you either have to infect the plant with a bacteria carrying the new gene, or smash it into the plant’s DNA with another, more violent method. The bacterial-insertion process is the step that elicits the federal review. The other kind, using a gene gun, doesn’t.

Scotts Miracle-Gro used a gene gun in this case, and then sent a letter to the USDA saying that means their new grass doesn’t need to be tested in the traditional way.

The USDA agreed, and now Scotts is free to sell the grass without a federal permit. Until the inevitable first lawsuit is filed, anyway.