Say Hello to UBR-1, One-Armed Agent of the Robot Economy

The UBR-1 can pick up a remote. The new robot unveiled today by Unbounded Robotics can’t bend at the waist... 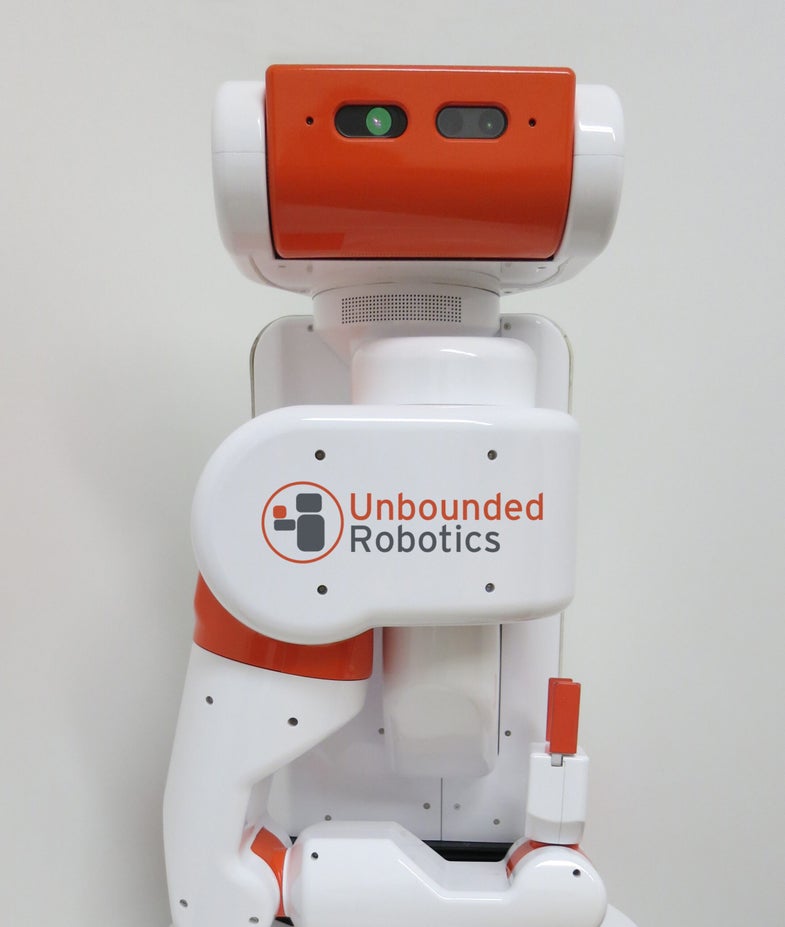 The UBR-1 can pick up a remote. The new robot unveiled today by Unbounded Robotics can’t bend at the waist or take a knee—it has neither—but it can still get at that clicker. It can detect the object with its head-mounted 3D vision sensor and floor-level laser scanner, roll into range, lower its upper body (which ranges from 36 to 58 inches in height), and reach the floor with its single, highly-flexible arm.

This is what a breakthrough looks like in robotics. Simple tasks that most humans can complete without a second thought, can easily turn a machine into a bumbling, face-planting tangle of flustered algorithms and busted actuators. That UBR-1 can avoid destroying itself with such a feat is promising. That it can do so with a price tag of $35,000 is stunning.

Baxter, the two-armed, touchscreen-faced bot from Rethink Robotics is cheaper—$22,000—can be trained to carry out menial labor, but it has no mobility. It has to be physically hauled from one workstation to the next. And Willow Garage, the company that Unbounded Robotics spun off from this past January, sells the mobile, two-armed, highly-capable PR2 for $400,000. UBR-1 (pronounced “uber one”) is lacking an arm, but according to Unbounded co-founder and CEO Melonee Wise, who managed the robot development team at Willow Garage, few owners of the 40 PR2 currently out there reported using both of its arms. And as one potential customer told Wise, after getting a preview of the cut-rate UBR-1, “if I need two arms, I can just buy another one.”

More than its 3D vision sensor—sourced from the same company behind Microsoft’s Kinect—or its seven degree-of-freedom arm and modular, removable gripper (allowing researchers or customers to attach more specialized manipulators or equipment mounts), or even its ability to autonomously navigate and carry out orders, it’s UBR-1’s low cost that could finally pull robots out of factories, and into our lives. Specifically, Unbounded wants to start with supermarkets, possibly teaming up with a chain to use UBR-1 for restocking shelves. Identifying and stacking boxes of Rice-A-Roni, for example, based on a preset schedule, or voice commands from an employee, is well within the bot’s abilities. And at $35,000, the projected return on investment for a robot restocker can be measured in years, rather than decades. “When we were in Willow, we tried to partner with several people for doing tasks like this with the PR2,” says Wise, “and the discussion always came down to, Well, what am I going to do with a $400,000 robot? It’s great that it can do these things, but it’s $400,000.”

Which brings us to the part where we talk about UBR-1 taking jobs.

For better or worse, or somewhere in-between, the robot economy is coming for us all. An increase in automation across entire industries, and the impact that will ripple throughout the world, isn’t inherently moral or immoral, but a hard fact of our future lives. But if you happen to restock shelves for a living, the robot economy isn’t some abstract topic for economic journals and doomsaying journalists. It could hit you as soon as next summer, when Unbounded plans to have its first units delivered.

In some use models, there’s no denying that UBR-1 will either fully or partially replace a person. It could not only ferry products around the store (so long as they don’t weigh more than 3 pounds) but do tricks, like creating a display that spelled out a brand’s name, an admittedly dorky mission, that nonetheless wouldn’t require a human babysitter. In other roles, though, it could simply improve operations, pulling and visually logging completed parts from CNC machines, or hand-delivering small room service items to hotel guests at 2 am, when staff is limited, and leaving the front desk vacant to deliver M&Ms to a tipsy human isn’t exactly optimal.

And then there’s eldercare, and that remote on the floor. Those without limited mobility might not understand the benefit of having a robot around that can do simple things, like fetching objects from around the house. Like other robots designed to share spaces with people, UBR-1 uses minimal force in moving and actuating, and yields to even the slightest touch. Unbounded doesn’t see UBR-1 as a replacement for a nurse, for example. But if the same bot that ousts supermarket restockers can help keep seniors out of a nursing home for a few more years, perhaps the robot economy, and its machine agents, aren’t so bad after all.