It's the best tagline a gimmicky jump-assisting shoe could want: "Banned by the NBA." And now it's true 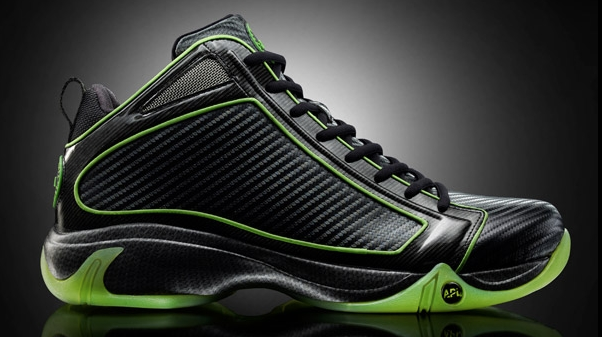 After a few weeks of testing, the NBA has officially banned Athletic Propulsion Labs’s Concept 1 sneaker. The Concept 1 uses a spring-loaded system to allegedly improve a player’s vertical leap by a few (but significant) inches–a benefit that, true or not, just doesn’t fly with the NBA.

Athletic Propulsion Labs was founded by two 23-year-old twins, Ryan and Adam Goldston, which is only surprising until you learn that the Goldston twins are the sons of Mark Goldston. Mark is the creator of all manner of sneaker gimmickry, including the lights in L.A. Gear footwear, Hexalite, and most famously, the Reebok Pump. So this kind of podiatric silliness is in Athletic Propulsion Labs’s blood.

The sneakers in question, the Concept 1, has a sort of hard elastic rubber bit that runs from the heel to the forefoot, connecting with the “Load ‘N Launch” device at the forefoot. The “Load ‘N Launch” is basically a spring in between two pieces of plastic which theoretically uses the energy transferred from the heel to increase one’s vertical leap.

Sports Illustrated tested the Concept 1 back in September, and found that they do actually work–at least, they sort of work, sometimes. A two-footed leap seems to be the only way to feel any difference, and even then, only some testers noticed an improvement. But it did, when used in a specific way, by a specific player, sometimes result in an extra inch or three of air. Whether that’s worth the $300 asking price (or the apparent moderate discomfort some testers noticed) is kind of arguable, but hey, at least they’re not total snake oil.

That the shoes work even a little bit is enough to get the NBA to ban them. The NBA said in a statement that “Under league rules, players may not wear any shoe during a game that creates an undue competitive advantage.” But Athletic Propulsion Labs couldn’t be more thrilled: They’ve plastered “Banned by the NBA” over their entire website, making it their rallying cry. That’s bound to be a disappointment to the 30% of the NBA’s freshman class that APL claims ordered the shoes, but don’t be surprised to see them popping up in pickup games across the country instead.

[Sports Illustrated and NBA.com via Gizmodo]