Back on August 22, elation mixed with anxiety as Chilean rescue authorities located 33 miners alive in a collapsed gold... 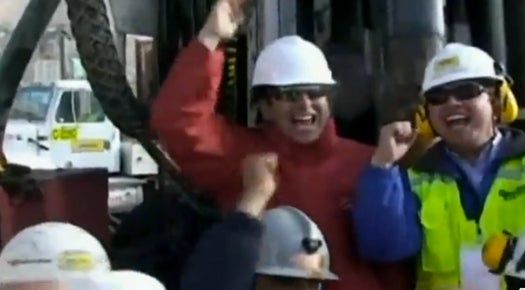 Chilean rescue workers celebrate as the drill boring the rescue shaft finally broke through to reach the 33 men trapped 2,000 feet below the surface.
SHARE

Back on August 22, elation mixed with anxiety as Chilean rescue authorities located 33 miners alive in a collapsed gold and copper mine, trapped more than 2,000 feet below the surface. “The 33 of us in the shelter are well,” the miners scribbled on a note that they attached to the end of the rescue drill, but officials worried that it would take until Christmas to free the trapped men. Now, Christmas is coming early for the 33 miners and their families; Chilean authorities now say extraction of the men could commence as soon as tomorrow night.

Here’s how it’s going to go down.

After the mine collapse, rescuers on the surface were able to get fresh water, food, and other supplies to the trapped men via tiny boreholes, but to drill a shaft big enough for the men to escape was another story altogether. The rescue shaft is only about the size of a bicycle tire, stretching all the way from the surface to the 500-square-foot chamber where the men have been living since August. Moving 33 men through a narrow, somewhat unstable shaft is going to take some technological trickery.

The biggest trick by far is the custom-built rescue capsule, designed in part by NASA engineers who have been helping the Chilean Navy devise a means to ferry the men to the surface. At just 21.5 inches in diameter, “Phoenix” – as the capsule is known – weighs nearly 1,000 pounds and stands about 14 feet tall. The men packed tighlty inside will be hooked to an oxygen supply good for 90 minutes (the trip to the surface will hopefully take no more than half an hour for each miner). The capsule is fitted with exterior wheels that will help it slide down the borehole as it is lowered by a massive crane.

As of about around noon Monday, engineers had finished reinforcing what they thought to be weak parts of the shaft and conducted a successful unmanned test of the Phoenix capsule, taking it down 2,000 feet into the ground (just 46 feet shy of where the miners are awaiting rescue). The next step is a manned test of the rig. After enough dry runs have convinced rescue officials that the rescue vehicle is safe the rescue will begin, an event that has been termed “D-Day.”

Barring any setbacks, D-Day could begin late Tuesday night, with the first miner surfacing in the early hours of Wednesday morning. First, a Chilean Special Forces medic will descend to assess the state of the miners. Miners in decent condition will be sent up first, followed by the weakest and least healthy of the group. The strongest and most healthy miners will be the last out of the mine. Each miner will be in constant communication with rescuers while in the capsule, and each will wear special glasses to shield his sensitive eyes – now more than two months without natural daylight – from the sun. The operation will likely go on until Thursday morning.

And what happens if the capsule gets stuck? We don’t want to jinx the operation by even mentioning the possibility, but the capsule is equipped with an escape hatch in the bottom that would allow a miner to descend back down into the shelter. Here’s hoping no one has to use it, as there’s a heck of a welcoming planned for them up here on the surface.