Tim Berners-Lee, Creator of the Web, Says Everyone In The World Deserves a Net Connection

On any given day on the World Wide Web, a lot of people say a lot of things. But when... 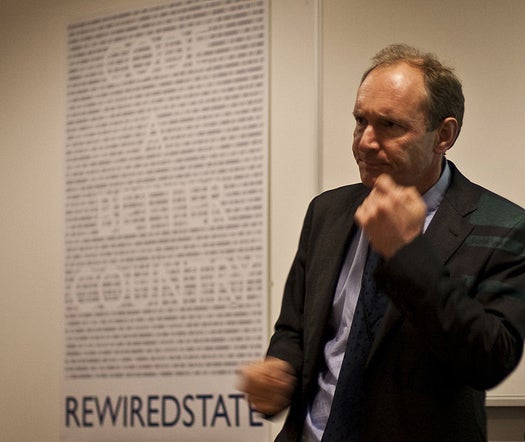 On any given day on the World Wide Web, a lot of people say a lot of things. But when the guy who actually invented the Web takes the podium, people might be more inclined to listen. If, that is, they have access. Tim Berners-Lee – Internet pioneer, MIT lecturer, and the guy invented the World Wide Web – sounded off on a variety of issues during his keynote at Nokia World today, but one point was especially interesting: the idea that everyone in the world should be given a free low-bandwidth Internet connection “by default.”

On its face, the sentiment might sound more charitable than realistic. But what Berners-Lee is really saying – and this is the somewhat radical part of the notion – is that access to information should be a right rather than a privilege, just like any other bestowed on a person by virtue of being alive; the Internet as inalienable right.

Berners-Lee may have rewired the world with his notion of a global network connecting everyone everywhere via the cables in the back of their computers, but he’s not trying to rewrite centuries of social philosophy here. Rather, he’s arguing that information has the power to make all men (and women) equal. Just one-fifth of the world has access to the Web, he says, while the other 80 percent of people are left in the dark.

Given the rapid expansion of networks, most people in the world now have access to Internet coverage, yet they cannot join the global dialogue for lack of Internet service. But with the proliferation of cell phones over the past two decades, people in even the most far-flung corners of the world could have access to life-saving health care information, educational opportunities, agricultural info, and business data.

That information – in a person’s own tongue beamed to their own device – could accomplish everything from reducing drought to slowing the spread of HIV/AIDS to helping mother’s provide better childhood healthcare. That, in turn, does more to equalize people across borders and oceans than, say, shipping some malaria meds to one country or another or teaching sexual education in third world states.

Declaring a new universal human right in the year 2010 sounds a bit radical, but Berners-Lee isn’t the only one embracing the notion. Dr. Hamadoun Toure, secretary general of the UN’s International Telecommunications Union, used that exact language to describe access to information in a recent interview. But providing that access is another matter entirely. Berners-Lee says that if carriers provide free low-bandwidth Internet to everyone, the prosperity it affords individuals will lead them to upgrade to paid, higher-bandwidth services in the future. It’s an investment that telecom CEOs will have a hard time explaining in their quarterly earnings reports.

So is access to the Web/information a universal human right? And if so, are governments or businesses obligated to provide at least the most basic access to all who desire it? Feel free to opine in the comments below.