New York City may be on the cutting edge of cuisine and fashion, but in nerdier pursuits like cartography, NYC... 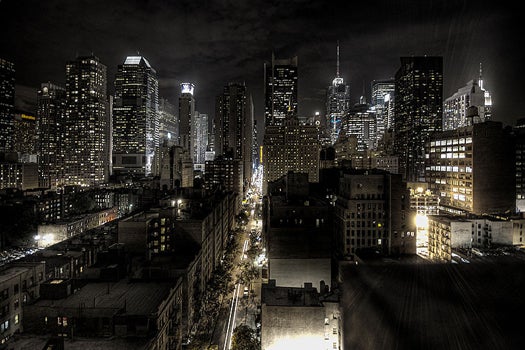 New York City may be on the cutting edge of cuisine and fashion, but in nerdier pursuits like cartography, NYC has unfortunately fallen behind — like, 30 years behind. But a twin-engine airplane fitted with LIDAR scanners has lately been gathering data that will close the city’s map gap, creating extremely detailed digital maps of the city that will lead to better land management, inform emergency protocols, and help identify the best places to install solar panels across the five boroughs.

The early a.m. flyovers, conducted by a specially equipped Shrike Commander aircraft, will produce the most detailed maps the city has ever known, capturing 3-D images that detail surface terrain and structural elements in unprecedented detail. Current maps — like the one FEMA uses to determine the city’s flood plains — were composed in the 1980s from aerial photography and surveys.

The new maps will help city planners rezone neighborhoods, determine shifts in population density, identify remaining wetlands, and even figure out which neighborhoods simply need more trees. It will also help the city determine what to do if/when rising sea levels brought on by global warming begin to threaten waterfront areas.

An operator aboard the aircraft operated the LIDAR — light detection and ranging — sensor as the pilot made repeated low-flying sweeps over the city at around just 3,500 feet during the second half of April. The laser surveying tech fired laser pulses from the aircraft at the topography below, measuring the time it takes the pulses to bounce back, much as sonar does with sound.

While wetland identification and population density maps will surely excite urban planning types, the solar map is hands-down the most exciting aspect of NYC’s new cartographic pursuit. The aerial survey has determined the number of pitched and flat roofs across the city and will allow NYC residents and property owners to go online and see whether their buildings are good candidates for solar panels. That, in turn, could lead to increased adoption of solar tech, making the U.S.’s most densely populated burg even greener. The data is currently being crunched and should generate detailed solar and flood maps by year’s end.