For about $250, you can make your very own space-age spy tech, following an MIT professor’s instructions. It can capture... 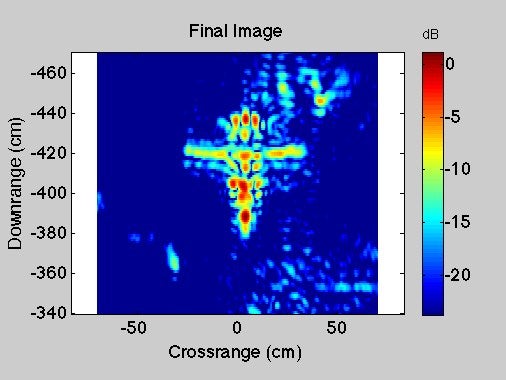 For about $250, you can make your very own space-age spy tech, following an MIT professor’s instructions.

It can capture high-resolution images of small objects — like a message written in push pins that had been hidden behind a foam plate.

Using a garage-door opener, microwave parts and a cordless drill, Gregory Charvat made a working synthetic aperture radar (SAR) system, the same kind of technology the military and NASA use. Charvat used algorithms to combine the back-scattered radar images into a high-res photos of things in his garage, like a Cannondale bike and a model F-14.

SAR is useful because it combines multiple radar images to create higher-resolution images than would otherwise be possible. There are a couple ways to do it — by using a single antenna on a moving object, like an airplane or spacecraft, or by using multiple small antennae scattered over a large area. NASA uses SAR to create detailed maps of other planets, and it can be used to map the spread of oil in the Gulf of Mexico, for instance.

Charvat notes that developing new SAR algorithms is difficult because the technology is so expensive. But his system is cheap: It’s a frequency-modulated continuous wave radar with a homodyne radar architecture, made from a discarded Genie garage-door opener and an old microwave.

“This system could easily image objects as small as pushpins and 4.37 mm diameter steel spheres,” he notes on his Web site.

Granted, his $250 price tag doesn’t include the computer you’ll need to drive the device. But ingenuity is priceless.