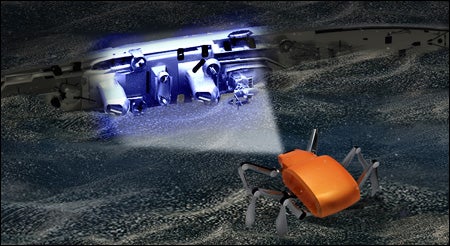 South Korea’s flock of robotic teachers look and sound goofy, but the nation is deadly serious about its latest project: developing aquatic robots by 2016 which can swim and crawl their way across the seafloor several miles down for search and rescue purposes, according to the Korea Times.

The government announced today that it would spend about $18 million (20 billion won) over the next five years to create its creepy-crawly robot. That represents a doubling of the project’s budget following the sinking of the South Korean Navy frigate Cheonan late last month, which killed dozens of sailors.

Such six-legged devices would walk at speeds of 98 feet per second and swim at up to 59 feet per second. The design specs call for it to patrol the seabed at depths of about 3.7 miles.

A shallow-sea version would come online by 2012, with a deep-sea prototype slated for 2015. The robots would also carry sonar equipment, according to The Korea Herald.

The South Korean ministry believes that having such a drone might have sped up search and rescue efforts for the Cheonan sinking incident, which took place in the West Sea with strong tidal currents and poor visibility.

[via Korea Times and The Korea Herald]