This week, we heard 24 cadets at the Air Force Academy received the first wings awarded in the institution’s history...

This week, we heard 24 cadets at the Air Force Academy received the first wings awarded in the institution’s history for pilots specializing in unmanned aerial systems and other remotely piloted aircraft. Seeing as how this year the Pentagon will buy more unmanned aircraft than manned, we thought it quite significant that the first class of undergrads had hit this milestone, but—geeks that we are—what really piqued our interests were the unique wings themselves.

It turns out that new UAV pilots do have their own insignia, which was approved and handed out to pilots completing non-undergraduate training in unmanned aerial systems late last year (Note: for the cadets honored Tuesday, receiving their “wings” is more a turn of phrase; they still have some training to complete should they choose to pursue the same distinction as the actual Predator and Reaper pilots). 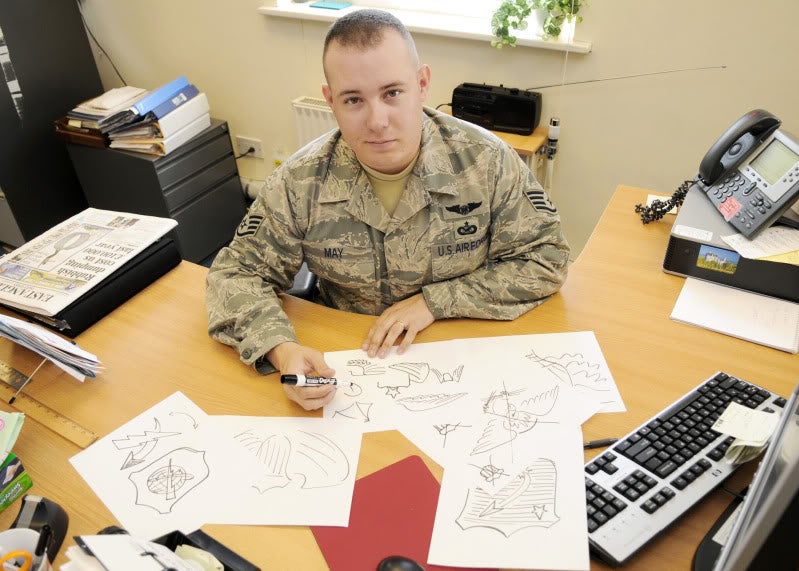 The designer of the new UAV wings

Designed by Staff Sgt. Austin May of the 100th Air Refueling Wing, the UAV occupational badge is meant to convey the same airborne-oriented aesthetic as the traditional Air Force Pilot badge (see below) while symbolizing the unique role unmanned aircraft have taken in America’s surveillance and strike capability.

The actual wings are similar to those on the standard Air Force Pilot badge to signify that, while remotely piloted, UAVs are still planes in the air, subject to the same laws of physics and principles of flight as piloted aircraft. But the shield is wholly unique. Its shape mirrors that of the traditional design, but the insignia within is specific to the remotely-piloted aircraft mission.

The globe represents the world in which Airmen operate and the global reach of American air power, a reach facilitated by the unmanned aircraft. The rays of light symbolize both the dawn of a new age of aviation as well as the UAV’s ability to shed light on far-flung corners of the planet. And the lightning bolt? It’s just a reminder that though the primary objective of many unmanned missions is surveillance and reconnaissance, remotely piloted aircraft reserve the capability to rain down some fire (specifically Hellfire) if needs be.

As for Staff Sgt. May, his artistic talents aren’t limited to occupational badges. For those of you who dig military humor, his “Air Force Blues” comic strip is updated weekly.