To perfect the vertical and short takeoff and landing ability of the F-35 Lightning II, test pilots have been taking... 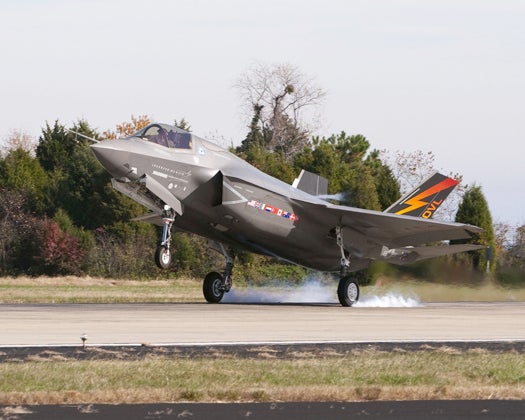 Aside from showing off just how versatile the plane is, the video also marks another salvo in an ongoing battle between Pratt and Whitney, who make the F135 engine currently powering the F-35, and General Electric and Rolls-Royce, who make the F136 replacement engine. The contract for F-35 engines is especially juicy, with multiple countries and multiple armed services all set to fly the new plane.

The fight, waged on the floor of Congress by representatives variously in the pocket of one company or the another, has even spilled into cyberspace. The F135 engine has its own Facebook page, as well as its own Twitter feed, both of which spend most of their time touting how the F136 engine is expensive and unnecessary. Not to be outdone, the F136 has ITS own Twitter feed, which lets followers know just how much better the F135 is than the F136.

Personally, I’m just upset that both of them set their status to “in a relationship” just when I thought they were starting to like me.