A Look At Japan’s Retro-Future

As much as we love the actual future here at Popular Science, we love the past’s vision of the future... 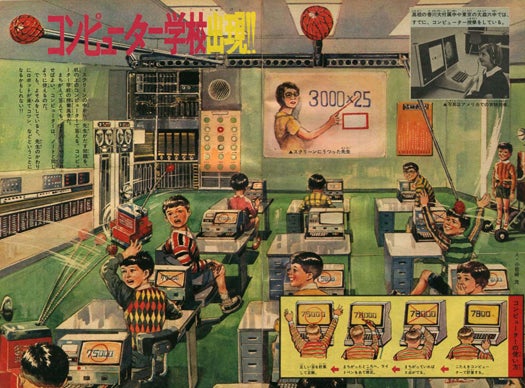 Those Robots Are Still Nicer Than Nuns

As much as we love the actual future here at Popular Science, we love the past’s vision of the future almost as much. So we basically freaked out when our good friends over at Pink Tentacle discovered this spread from a 1969 issue of the Japanese magazine Shonen Sunday.

These pictures show a predicted 1989 where computers have changed how we live. The above photo depicts a classroom full of children learning on computers, watching a video of a teacher, and receiving beatings from enforcement robots.

Considering that most students today actually use their computers for sexting, downloading music, and online poker, maybe those robo-thugs weren’t such a bad idea. 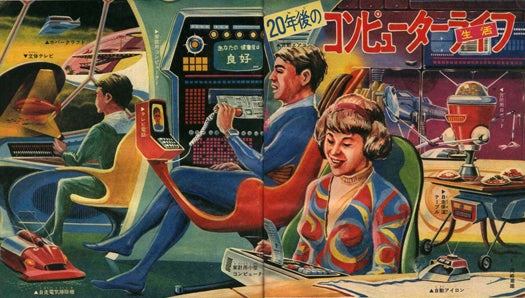 Rosie Was Sexier Than Whatever’s Cleaning Those Dishes

This pic shows the home of the future. The personal computer and Roomba-like vacuum robot are pretty spot on, but why is Mom’s computer using a punch card? And why does the robot need arms to clean the dishes? If they have video phones and flying cars, you’d think they’d at least have a dishwasher. 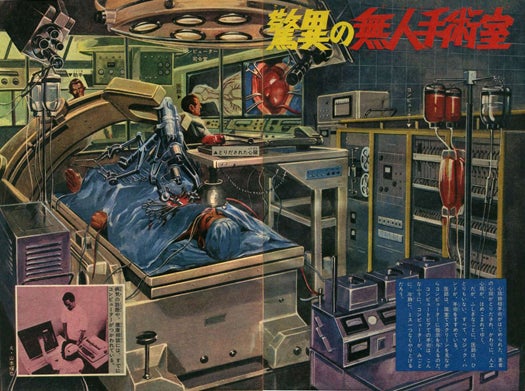 This One’s Actually Not That Far Off

This third image is probably the most accurate. Sure, it was off by about 20 years, but that machine is the spitting image of the DaVinci medical robot. Listed as one of our top surgical advances of the last 20 years, remote surgery via robots was a bold prediction in 1969, but one that our present technology has vindicated.

This article leaves me with one question, though: Why is everyone in the future always wearing a jumpsuit?