Meet Ged Galvin, the Steve Austin of colorectal surgery. After a car crash in which Galvin almost died, surgeons at... 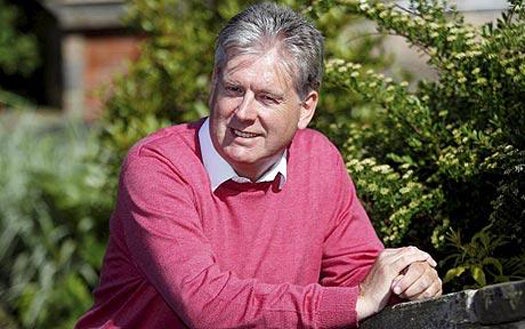 Ged Galvin 13 NOV 2009 See SWNS story SWBIONIC: Meet Ged Galvin who sustained life-threatening injuries in an horrific crash but feels like a ''new man'' after doctors fitted him with a BIONIC BOTTOM operated by remote control. Father-of-two Ged, 55, was given just hours to live by doctors after he was ''ripped in half'' by his motorcycle fuel tank when a car pulled out in front of him at 45mph. He suffered massive internal injuries, a detached retina in both eyes, a fractured pelvis and vertebrae, and broke his left foot, right leg, two wrists, and an ankle. However, according to Ged the worst thing about the accident was the injury to his bottom, which meant he had to be fitted with a stoma, or colostomy bag.
SHARE

Meet Ged Galvin, the Steve Austin of colorectal surgery. After a car crash in which Galvin almost died, surgeons at Royal London Hospital realized they could rebuild his crushed organs. Stronger. Faster. They had the technology to give him a cyborg colon.

“The operation changed my life and gave me back my pride and confidence,” Galvin told the Daily Telegraph.

After he spent a short time with a colostomy bag, the doctors surgically removed muscle from Galvin’s leg, fashioned it into an ersatz sphincter, and surgically implanted electrodes into the new muscle ring. Doctors then installed the device in Galvin.

Now, Galvin is free from the indignity of a colostomy bag. He controls his functions with a small remote control, about the size of a cell phone, that operates the electrodes. Now he can do his business at his leisure, although the muscles and electrodes will need replacement every five years. “Because of the remote control I can lead a normal life again,” Galvin said.

Armed with his new sense of confidence, all Galvin has to do now to steal Steve Austin’s crown is fight Sasquatch.