The Power Loader Is Real

Still no word about the xenomorphs, though 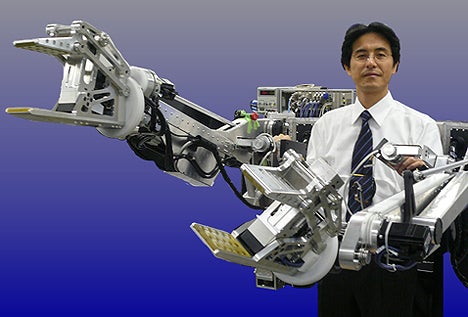 For everyone out there who’s been fighting aliens with a flamethrower, but now needs something with a little more kick, you’re in luck. Panasonic has taken a break from hawking TVs and camcorder to build the power loader from Aliens.

Designed by Panasonic subsidiary Activelink, the “Dual Arm Amplification Robot” weighs 500 pounds, and allows the user to lift 220 pounds with the flick of a wrist. That’s not quite enough to bench press an alien queen, but then again, it’s still in the design phase.

Activelink hopes their power loader will eventually serve the same function as the movie’s: lifting heavy loads in industrial and disaster-relief situations. They hope to roll out a working version by 2015, but I have a bunch of things that need to get thrown out of an airlock ASAP. So the sooner I can get one, the better. Check out this video for a look at what this bad boy can do.