Neolithic surgeons might have practiced their skull-drilling techniques on cows

Trepanation may not have been limited to humans. 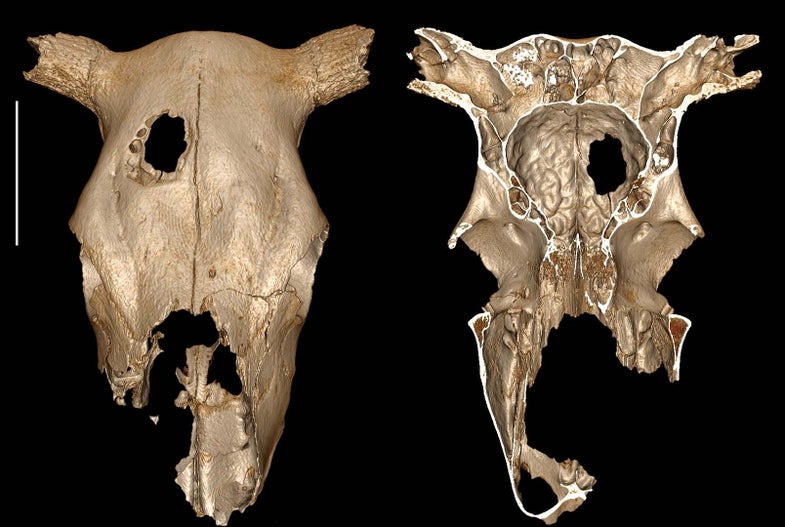 Bovine brain surgery is pretty rare. So if you were visiting the Neolithic dig site at Champ-Durand in France and you found a roughly 5,200 year-old cow skull with a large hole in it, you’d probably assume it was an accidental goring. Perhaps some other cow stabbed this one in the head with its horn. You’d dutifully record your observations, assigning blame to some long-lost murder cow and move on, confident in your analysis.

But you’d be wrong—at least in this case.

French researchers recently revisited the purported goring victim’s skull and realized that this was no accident. The hole was too regular and round. There were no signs of trauma. And little cut-marks near the gaping hole look like the result of a sharp tool, not a giant horn. In fact, they resembled the scrapes seen on human skulls that have undergone trepanation, which is exactly what these scientists think happened to this ancient bovine. They recently published their results in the journal Scientific Reports.

What’s trepanation, you say? Glad you asked. Back in the day—the day being almost any from the Neolithic age through the Renaissance—people used trepanation in an attempt to cure all kinds of mental ailments. The procedure was simple, if dangerous: drill a hole in the person’s skull. It’s one of the earliest known operations, and there’s evidence that it was sometimes even successful. Someone suffering from a disease that increased cranial pressure, like a brain hemorrhage, could actually benefit from the procedure. Of course, ancient surgeons also thought it could cure seizures and psychological issues, none of which can be mitigated with a giant hole in your head.

Even if it rarely cured anyone, at least some people survived the operation. Archaeologists have found skulls with signs of significant healing, showing that the person lived long enough for their bones to remodel (it takes a couple days just to start that process).

Now, it’s not that any Neolithic humans thought this cow was suffering from a mental disorder, or even that they were trying to save its life. There’s no sign of bone remodeling, which means either this bovine didn’t survive the operation or the procedure started after the cow was already dead. The scientists think it may have been a kind of practice round for ancient surgeons. Drilling holes in skulls is precarious work, and it would have paid to practice on something you cared less about that a human. A live cow might have done the trick, or even a recently deceased one.

They’re not sure yet how common this was because this is the earliest known example of animal surgery. Fernando Ramirez Rozzi, one of the two co-authors on the study, noted that there is one other skull from approximately the same era that might have also been a case of trepanation. A picture of the skull (a wild boar this time) was published in a 1948 paper, but Rozzi says, “unfortunately this skull was never dated and was found out of an archaeological context.” If were a trepanned skull, it would show that this operation was more common on animals than previously thought. “But,” he says, “without dates and without archaeological context it is impossible to say anything,” and unfortunately no one has any idea where the skull might be today.

There may also be evidence hiding amongst known skull fragment as well. “It is very difficult to find the whole skull of an animal in archaeological context,” Rozzi explains. There are plenty of bone pieces that show marks from trepanation procedures, but those were all marked as human skulls—no one considered that they could belong to another creature. “Probably we need to observe these pieces more carefully and consider if they are a part of an animal skull.” Rozzi says.

If Rozzi and colleagues can reclassify some of those fragments, we might have found the answer to how ancient surgeons mastered the art of trepanation. The very fact that people survived the operation, given the state of medicine thousands of years ago, has always been impressive. Perhaps we have cows to thank for that.