Humans flourished through a supervolcano eruption 74,000 years ago (so you can make it through Tuesday) 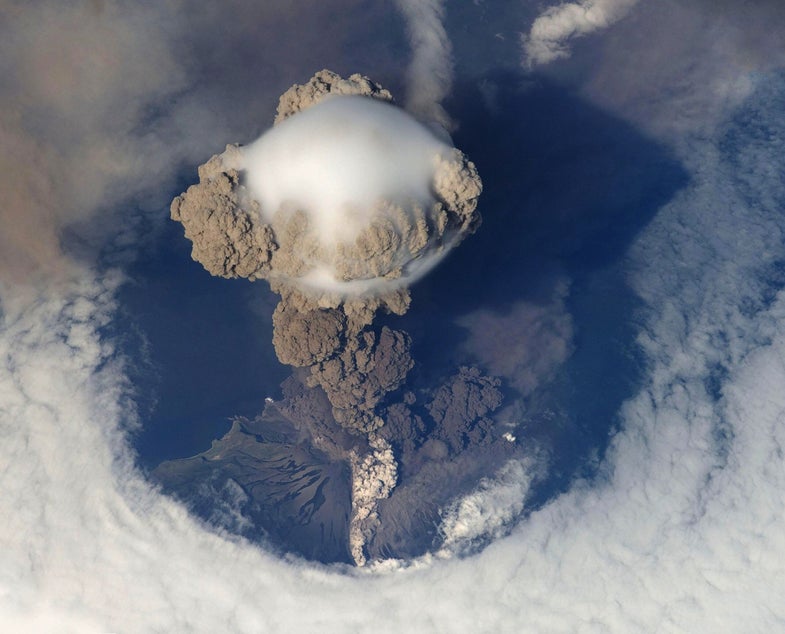 About 74,000 years ago, a large chunk of a Pacific island exploded. It sent ash and other debris around the world, including to the southern tip of Africa, where it would be found by a team of international scientists and entered as the latest data point in one of the hottest debates in paleoanthropology (I know):

Did the Toba supervolcano thrust our planet into a 1,000-year volcanic winter, thus bottle-necking animals and plants alike? Or was it just a little blip on our historic radar?

That’s the contentious arena into which our intrepid researchers venture, this time with a new study in Nature establishing that humans in modern-day South Africa not only survived, but flourished after the Toba eruption. Where once was (we think, maybe) a mountain, there is now a huge caldera with a lake inside, and an island inside that. Their evidence shows that debris from the explosion landed 9,000 kilometers (5592.3 miles) away, the farthest distance traveled ever recorded for the Toba eruption. It also makes one much more significant claim. As the researchers write: “Our results raise the question of whether the modern human population on the south coast of South Africa was the sole surviving population through a decade or more of volcanic winter.”

We still don’t know for sure how much impact Toba had on the climate. One thing we do know: it was a freaking giant eruption. Its volcanic explosivity index—an actual scale of the power of eruptions—is an eight, which doesn’t sound high until you know that the famous Krakatoa explosion is only a six. The 1815 Mount Tambora eruption was a seven, and that event produced the “year without a summer,” because the ash and sulfur dioxide blown into the atmosphere cooled the planet so much. It exploded in April, and in June the northernmost areas of New Hampshire and Vermont saw frost. A foot of snow accumulated near Quebec City in the peak of summer.

It follows that the Toba eruption should have had a massive impact on the climate. Back in the late ‘90s, researchers argued that Toba had a significant role in the global cooling that followed in the next 1,000 years. It at least seems reasonable that there would have been a short-term volcanic winter, given the magnitude of the explosion.

But it’s difficult to tell how much impact an eruption like this had. Some evidence suggests multiple animal species experienced population bottlenecks (where the gene pool is massively reduced) around this time. Humans may have as well. Paleoanthropologists have been going back and forth on this for years. One paper will come out claiming to show no effect, then other scientists emerge to argue there’s a flaw in the data. And repeat.

This new finding doesn’t exactly settle that debate, but that’s not really the point. They’ve done something much bigger: they linked two sites together in time.

Most paleoanthropological sites are dated roughly, with thousands of years’ worth of error on either side of the approximate date. Scientists generally can’t say with any certainty that a dig site was inhabited during an exact window, so figuring out whether events at separate sites happened at the same time is difficult. For example, you might see evidence of a great plague at two spots a few dozen miles from one another, but it would be difficult to say for sure that the ailments struck in the same year.

But these researchers were able to connect both sites they were working on to a two week window. That’s when shards of glass fell from the sky, having traveled thousands of miles to get to Africa from Sumatra. Because this terrifying debris all fell all at once, scientists could pick out precisely where in the anthropological records the eruption happened and tie those points together.

When we excavate further spots in Africa, we can use those same techniques to figure out when Toba erupted in the history of that site.

It’s like the volcanic version of using solar eclipses to date historical records. Solar eclipses are a stunning experience even today, so it’s no surprise that ancient humans often wrote about them as mysterious cosmic or religious events. And because we know they’re visible in specific spots at predictable intervals, we can work backwards to figure out exactly which day every eclipse that’s ever happened occurred. If Plato wrote about an eclipse in his diary, we’d just need to know when an eclipse happened in Athens around the time Plato lived, and then we’d know exactly what day he wrote that diary entry. We could then use that reference point to date the surrounding pages, which might help us understand when historically significant cultural events occurred.

Volcanic eruptions are similar because they’re sudden, and leave characteristic traces on the ground where debris lands. The rocks and ash that form inside volcanoes don’t naturally occur anywhere else, so if you find evidence of volcanic rock hidden in layers of the anthropological record, you can date that to specific large eruptions that we know happened throughout history. And if any people were living nearby who had written or oral records, a giant explosion is sure to be in there in their scribblings. The same is true of earthquakes and tsunamis, and we date events in history by occurrences of those as well.

Given that humans at these two sites grew in number after the Toba eruption, we can safely say that if there was a bottleneck, these areas weren’t affected. Whatever sort of hellish conditions the region endured, these people thrived. It remains to be seen whether other archaeological sites can prove humans survived elsewhere. But hey—if they can make it through a decade of volcanic winter, you can survive whatever your week throws at you.