Start with the original army version and see how your body responds. 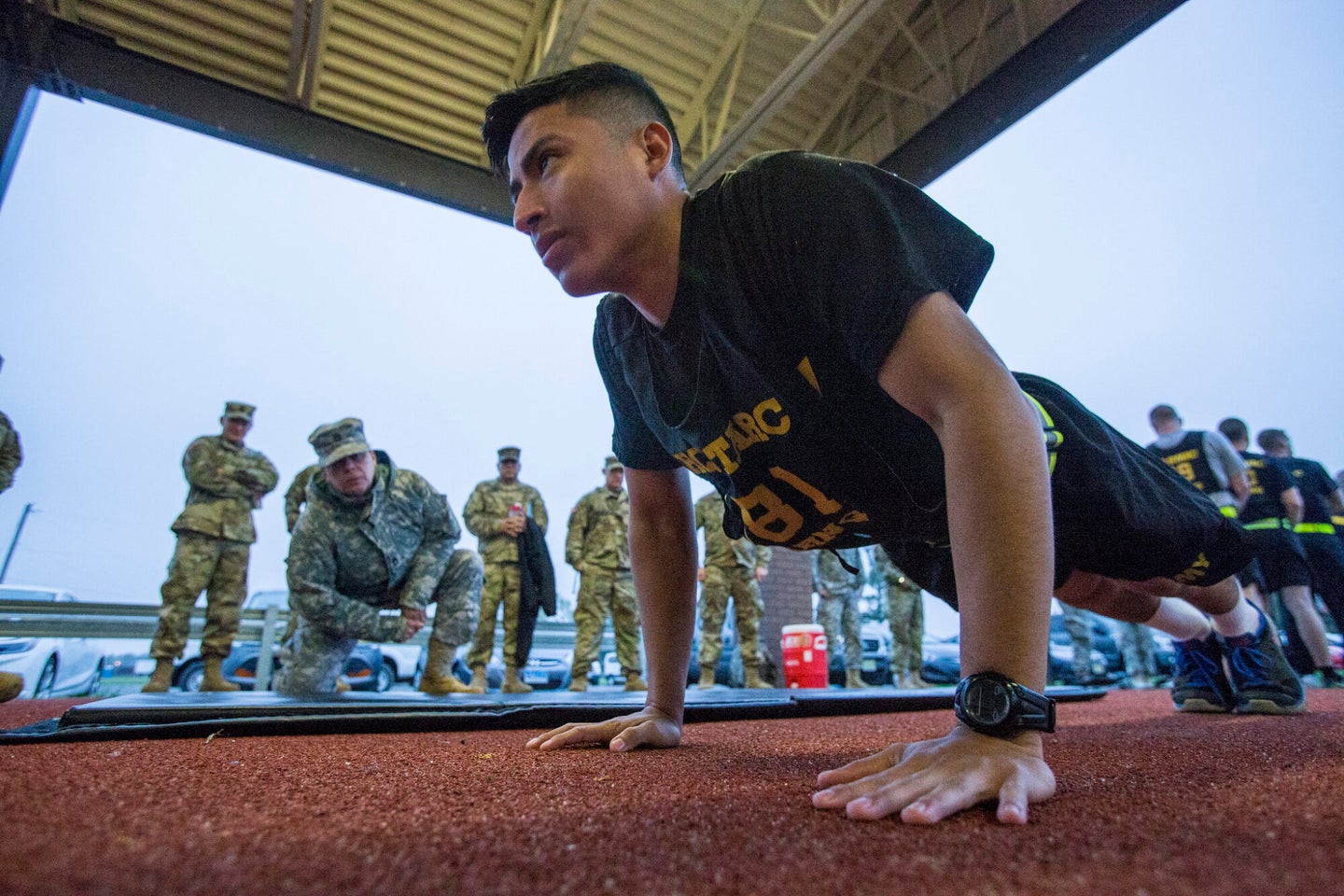 Burpees were first incorporated into the US Army fitness test in the 1940s, and have since become a fitness staple. Mark C. Olsen/New Jersey National Guard
SHARE

Navy SEALS swear by them. Power lifters and Spartan racers crank them out by the hundreds. Even Hall of Famer Jerry Rice mixes them into his workouts like hot sauce.

Plenty of non-scientists sing the praises of the burpee, a quick-flowing combo move that first turned up in army fitness tests in the 1940s. Some say it’s the best total-body exercise a person can do to build upper-body strength, improve stamina, and shred fat (a purported 200 to 300 calories in a half-hour sweat span). But does research support that?

There aren’t many studies comparing burpees to other types of high-intensity training, says Steve Bingley, an exercise physiologist and co-founder of Century Strength and Conditioning in Sydney, Australia. There have been experiments looking at the average number of burpees athletes can do, and how burpees stack up against battle ropes in elevating metabolic rates. Otherwise, the science around the supposed silver-bullet exercise is lacking. “Right now we’re doing them because they feel hard and use multiple muscles, and that’s it,” Bingley says.

According to Bingley, the lack of a standard burpee makes it a tougher area of study. The move has spawned countless iterations in the past eight decades, including some that skip the push-up or make it harder by adding a Superman leap to it. And while that could make it more attractive to fitness geeks, it also leads to a scattershot of outcomes.

Regardless, Bingley is a big proponent of the exercise. “If you do burpees over and over again, it’s going to improve your mobility, flexibility, cardiac health, and upper- and lower-body strength,” he says. “And that’s with minimal equipment, space, and instruction.” But what makes them so excruciatingly effective? Bingley’s been chasing that question for four years now. In 2019 he led a study that compared max oxygen uptake and muscle fatigue from two carefully designed workouts for the Australian Olympic boxing team. After putting 24 participants through a battery of weight room tests, the researchers concluded that burpees required more exertion than shuttle sprints (a popular exercise among athletic trainers) and led to twice as much muscle fatigue in the upper body.

That’s still a far cry from saying that burpees are the stuff of superhumans. “For a normal Joe Blow who wants to get back into the green mini skirt from college, sure, a burpee might get their heart rate going,” says Corliss Fingers, the director of strength and conditioning at Bethune-Cookman University in Daytona Beach, Florida. With nearly three decades of experience in the field, she’s trained athletes in 20-plus sports—and has yet to find one catch-all exercise that kicks everyone’s butts. “If I have a college player who’s trying to get in shape after a muscular injury, I’m going to throw them in the pool because there’s less impact. I’m not going to assign them 20 minutes of burpees or two minutes of plank,” Fingers says. (She does mention that she prescribed burpees for her virtual COVID-19 workouts. But that’s where the endorsement ends.)

Gideon Akande, an iFit trainer and Chicago Golden Glove boxing champ, takes a similarly cautious approach to burpees. For the casual gym goer, burpees might be the best way to hit multiple body parts in a limited amount of time. But there also needs to be some latitude for injuries and experience levels. “If you can’t take the impact of hitting the floor, for example, a caterpillar move—where you walk your hands out from your toes to a push-up position—could work better,” Akande says. “Substituting high knees or mountain climbers for the jump also helps.”

Akande personally prefers skater exercises for quick-service cardio. “Lateral movements are left out of a lot of workouts; they really test your balance,” he says. He’s a fan of planks, too, but cautions that it’s more important to focus on form, not stamina. “Most people misunderstand the plank. They think the longer they can hold it, the better they are at it,” he explains. “They risk hurting themselves by using upper traps and stressing the lower back.” To nail the position, press the palms directly into the ground, squeeze the abs and glutes, and breathe regularly, Akande says. “Even 30 seconds of bracing all the muscles is better than sagging down for a minute.”

For those who want to try the burpee life but don’t know where to start, Akande recommends working on your push-ups first. Practice going through the motion with your hands against an elevated surface like a wall, desk, or ottoman, keeping the elbows tucked in and the glutes and core held taut. Then try a modified version on your knees, holding your entire body in line and your center of gravity in check. Make adjustments every time you do a rep to increase efficiency and avoid injury.

Meanwhile, for those who want to feel the full burpee burn, Bingley suggests sticking to the original push-up version (see video above). “When you go from an upright jump to a horizontal plank and push-up, the change in position and pressure causes your body to pump more blood. Even if you do it slow and controlled, you’ll get a challenging workout.” Just make sure to kick the feet back after the hands are set for the plank—otherwise, Bingley says, there will be less gain and more (wrist) pain.

[Related: How to stretch for any type of workout]

Whatever pro athletes and trainers think of the move, Bingley still stands by it, both as a trainer and a scientist. “It’s like pushing shit up a hill, trying to get academics excited about studying burpees,” he says. “But we need to learn more about isometric variables, like arm and torso length, and build a better profile of this exercise that’s captured the world. Even my mom knows what a burpee is. That’s crazy.”