The world’s smallest magnetic data storage unit is made of just 12 atoms, squeezing an entire byte into just 96... 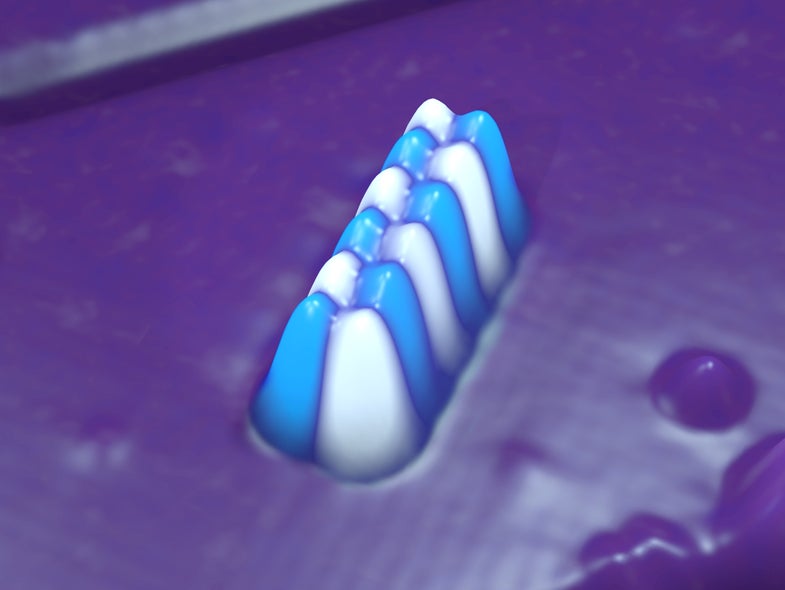 The world’s smallest magnetic data storage unit is made of just 12 atoms, squeezing an entire byte into just 96 atoms, a significant shrinkage in the world of information storage. It’s not a quantum computer, but it’s a computer storage unit at the quantum scale. By contrast, modern hard disk drives use about a million atoms to store a single bit, and a half billion atoms per byte.

Until now, it was unclear how many (or how few) atoms would be needed to build a reliable, lasting memory bit, the basic piece of information that a computer understands. Researchers at IBM and the German Center for Free-Electron Laser Science decided to start from the ground up, building a magnetic memory bit atom-by-atom. They used a scanning tunneling microscope to create regular patterns of iron atoms aligned in rows of six each. They found two rows was enough to securely store one bit, and eight pairs of rows was enough to store a byte.

Data was written into and read out of the bits using the STM — so it’s not like this type of bit will be integrated into hard disks anytime soon. But it answers some fundamental questions about the nature of classical mechanical systems, said Andreas Heinrich, the lead investigator into atomic storage at IBM Research Almaden and an author on a new paper describing the teeny bit. The team was interested in the transition from quantum to classical behavior, he said.

“If you take a single atom, you have to look at quantum mechanics when you describe its behavior,” he said in an interview. “As you make the (system) bigger and bigger, several iron atoms start talking to each other, and at some point you can ignore all of this quantum behavior and just think of them as a classical magnetic structure.” It turns out that point is around 12 atoms big.

“Many people would anticipate you would have to use quantum mechanical systems to describe these structures,” Heinrich said. “That was the most surprising thing to me.”

At the smallest scales, quantum effects blur stored information. A bit using six atoms would switch magnetic states — switching from “0” to “1” — about 1,000 times per second, for instance, which is much too frequently to be useful for data storage, Heinrich said. Eight atoms switch states once per second. But 12 atoms switched their states infrequently enough to be usable for storage — instead, an outside magnetic influence (in this case, the STM) changes their states. The nano magnets are only stable at a chilly 5 degrees Kelvin, or -450 degrees F.

The other breakthrough in this paper is the bits’ antiferromagnetism — this marks the first time antiferromagnetism has been used to store data. Ferromagnets, used in most modern data storage and other applications, use magnetic interactions between iron atoms to align all the atoms in a single direction. This creates a magnetic field that can be read out. This becomes a problem at the teeniest scales, however, because tightly packed magnetic bits can interfere with each other — this limits the downsizing of data storage systems. But this new 12-atom bit uses antiferromagnetism — the atoms are aligned in opposite directions, meaning they spin in alternating directions. The iron atoms were separated by nitrogen atoms and induced with the STM to spin differently, Heinrich said. This allowed them to be packed closer together, greatly increasing storage density.

The researchers switched the bit’s magnetic state five times to store the ASCII code for each letter of the word “think,” one of Big Blue’s slogans.

Sebastian Loth, who left IBM for CFEL four months ago and is lead author of the paper, said the 12-atom bit raises plenty of new questions for classical computing at quantum scales.

“We can now use this ability to investigate how quantum mechanics kicks in. What separates quantum magnets from classical magnets? How does a magnet behave at the frontier between both worlds? These are exciting questions that soon could be answered,” he said.

The paper appears in this week’s issue of Science. 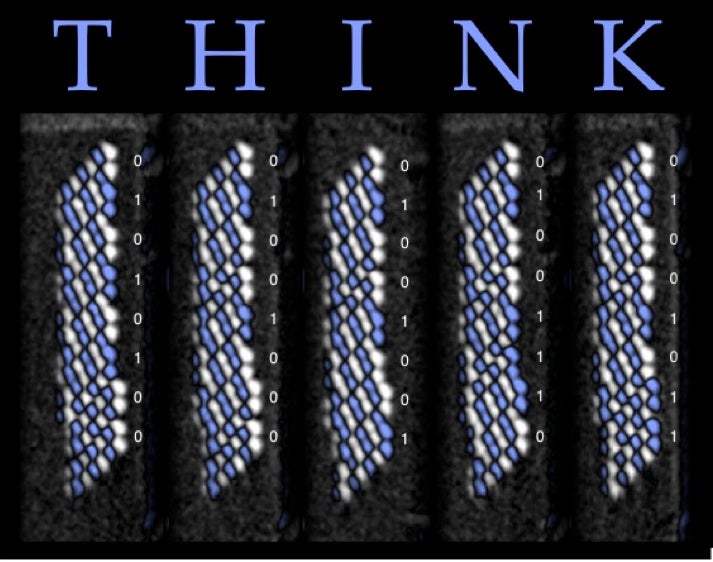 A white signal on the right edge corresponds to logic 0 and a blue signal to logic 1. Between two successive images, the magnetic states of the bits were switched to encode the binary representation of the ASCII characters “THINK.”