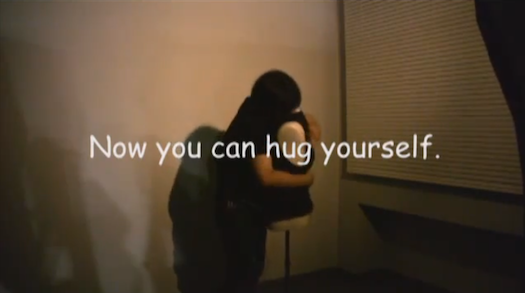 Japanese robotics engineers have a penchant for recreating human interactions with robots–whether that’s talking to disembodied robot baby heads, carrying the elderly, or eliciting trust with glowing ears. But the Sense-Roid is on a different level–when you hug its mannequin-like shape, it hugs you back.

Created by a student at the aptly named University of Electro-Communications in Japan, the Sense-Roid is essentially a sewer’s dress form–a mannequin torso, in other words–that wears a very particular jacket or vest. The user also wears a jacket, and when the two articles of clothing connect, they being to inflate with air and vibrate in ways meant to simulate a real hug.

In fact, the Sense-Roid mimics the pressure from the user’s hug, so in a way, hugging it is like hugging yourself. It detects the precise nature of the hug with micro switch sensors, then reciprocates in real-time. There are no known plans to make the Sense-Roid any more than a prototype.

The videos that follow are…weird. They’re safe for work, of course, as there’s no nudity or foul language or anything like that. But we can’t say that the image of somebody forcefully caressing a mannequin torso isn’t a little bit disturbing in its own way.