Following in the footsteps of many robots we’ve seen who perform awesome but random feats, Japanese electronics company Murata has... 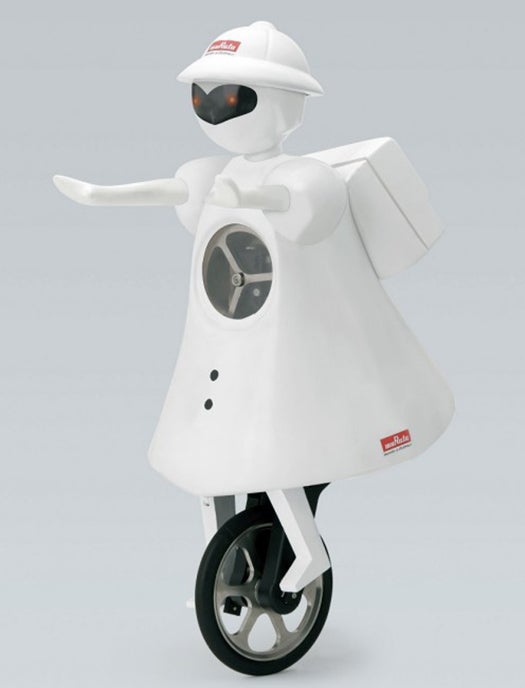 Boffins have created a new robot that can ride . . . a unicycle! 'Murata Girl' has sensors to keep her balance and can ride forwards and backwards. An electronic 'eye' made of ultrasonic sensors tell the robot when it is about to bump into something and its robotic 'brain' helps it change direction. The robot can be also be guided by humans using Blootooth technology found in phones and computers. A series of gyroscopes in Murata Girl's body help her stay balanced. The robot is the creation of Japanese technology group Murata Manufacturing. Their first robot 'Murata Boy' - Murata Girl's cousin - was unveiled in 2005 and was able to ride a bicycle. The company usess the robots in schools to promote science education and on television to advertise the brand. Ref: SPL51090 230908 Picture by: Splash News Pictured: Murata Girl Splash News and Pictures Los Angeles: 310-821-2666 New York: 212-619-2666 London: 870-934-2666 photodesk@splashnews.com<br. Splash News
SHARE

Following in the footsteps of many robots we’ve seen who perform awesome but random feats, Japanese electronics company Murata has revealed an update of their Little Seiko humanoid robot for 2010. Murata Girl, as she is known, is 50 centimeters tall, weighs six kilograms and can unicycle backwards and forwards.

Whereas in her previous iteration, she could only ride across a straight balance beam, she is now capable of navigating an S-curve as thin as 2.5 centimeters (only one centimeter wider than the tire of her unicycle)

The secret is a balancing mechanism that calculates the degree she needs to turn at to safely maneuver around the curves. She also makes use of a perhaps more rudimentary, but nonetheless effective, balancing mechanism and holds her arms stretched out to her sides, Nastia Liukin-style. Murata Girl is battery-powered, outfitted with a camera, and controllable via Bluetooth or Wi-Fi. Also, because we know you were wondering, she’s a Virgo and her favorite pastime is (naturally) “practicing riding her unicycle at the park.”

Watch her daintily and perfectly execute an S-curve below: