Video: A Contest For The Most Spectacularly Self-Destructive Robots

The gruesome scene above started out as a sweet teddy bears’ birthday party, but quickly degenerated into a fiery conflagration... 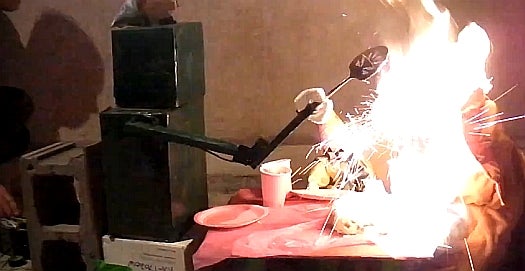 The gruesome scene above started out as a sweet teddy bears’ birthday party, but quickly degenerated into a fiery conflagration when the bears’ robot servant attempted to cut them a piece of cake.

This nameless failure of a robo-waiter (seen in action below) was the winning video entry in SparkFun Electronics’ Antimov competition – a contest challenging amateur robot engineers to build a bot that defies Isaac Asimov’s third Law of Robotics: that a robot must protect its own existence.

Instead, these robots attempt menial tasks and destroy themselves while failing spectacularly at accomplishing their goals.

The event took place on Saturday in Boulder, Colorado, but participants were invited to send video submissions as well. The birthday party inferno, submitted by Dennis Brunner, was actually supposed to be a live entry, but due to fire regulations, the fire marshal wouldn’t allow it, and the party became a video entry.

A knack for robocide seems to run in the family: the winners of the live competition were Brunner’s children: Brian, 13, and Rebecca, 11. Their Lego robot, dressed as a bank robber and balanced on a seesaw, cut through a rope attached to a bag of money, which fell on the seesaw, flinging the robot into the air and smashing it into smithereens.

“We didn’t have that many live entries,” said Pete Dokter, director of engineering at SparkFun. “Apparently people figured out that it was going to take real work to do it and they would have to destroy their creation in the end.”

Speaking of destruction, observe the sad fate of video entry ChefBot: a friendly, only marginally creepy-looking little guy on a mission to make you a delicious crème brûlée. Sadly, as you will see, he too is doomed to end in flames.

Dokter says SparkFun intends to run the competition again next year and that people have “expressed renewed interest.” With any luck, that means we’ll have more demonstrative robot fireballs to look forward to in 12 months.