Handheld terahertz scanners could soon be sniffing for drugs and explosives, transmitting super-high-speed data, and looking inside your body, based... 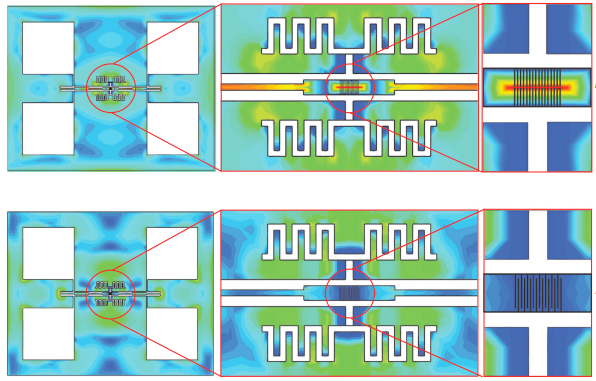 Handheld terahertz scanners could soon be sniffing for drugs and explosives, transmitting super-high-speed data, and looking inside your body, based on a new nanoscale T-ray device developed by researchers in the UK and Singapore. The new device can produce a much stronger beam of terahertz radiation than was previously thought possible, and at room temperature to boot. The T-ray beam could be integrated into portable scanners, like a real-life Tricorder, the researchers say.

Electromagnetic waves in the terahertz range, known as T-rays, are used in highly sensitive security scanners, some prototype medical devices and a host of other technologies. Like X-ray scanners, T-ray scanners can penetrate where optical light cannot — through paper, clothing, and you. They can also sense any molecule, because every one has a unique signature in the THz range, according to researchers at Imperial College London. This makes them useful as drug sniffers or medical imagers — they could sense molecules associated with cancer or other diseases, for instance. But THz imaging devices, like quantum cascade lasers, require huge amounts of energy and must operate at low temperatures, so they’re expensive and therefore not very common.

This new design creates a T-ray beam at low temperatures, essentially by mixing and amplifying beams of light at different wavelengths. It uses a pair of electrodes situated just 100 nanometers apart on a semiconductor substrate. Light in two different wavelengths shines on the electrodes and is funneled through the 100-nm gap. A strong current between the electrodes acts as an antenna and amplifies the light to the THz range. The T-rays can even be tuned to create a constant beam, which would be required for a T-ray scanner. The setup is two orders of magnitude stronger than existing THz systems, the researchers say in their paper, which was published this month in Nature Photonics.

Along with their efficacy at low temperatures, the best thing about this T-ray beam is its small size — it’s tiny enough to be integrated into existing silicon chips. So the T-ray scanner of the future could be as small as a handheld little gun, just like the Tricorder on Star Trek. It’s possible a team developing this type of technology will win the Tricorder X Prize much sooner than anyone expects.