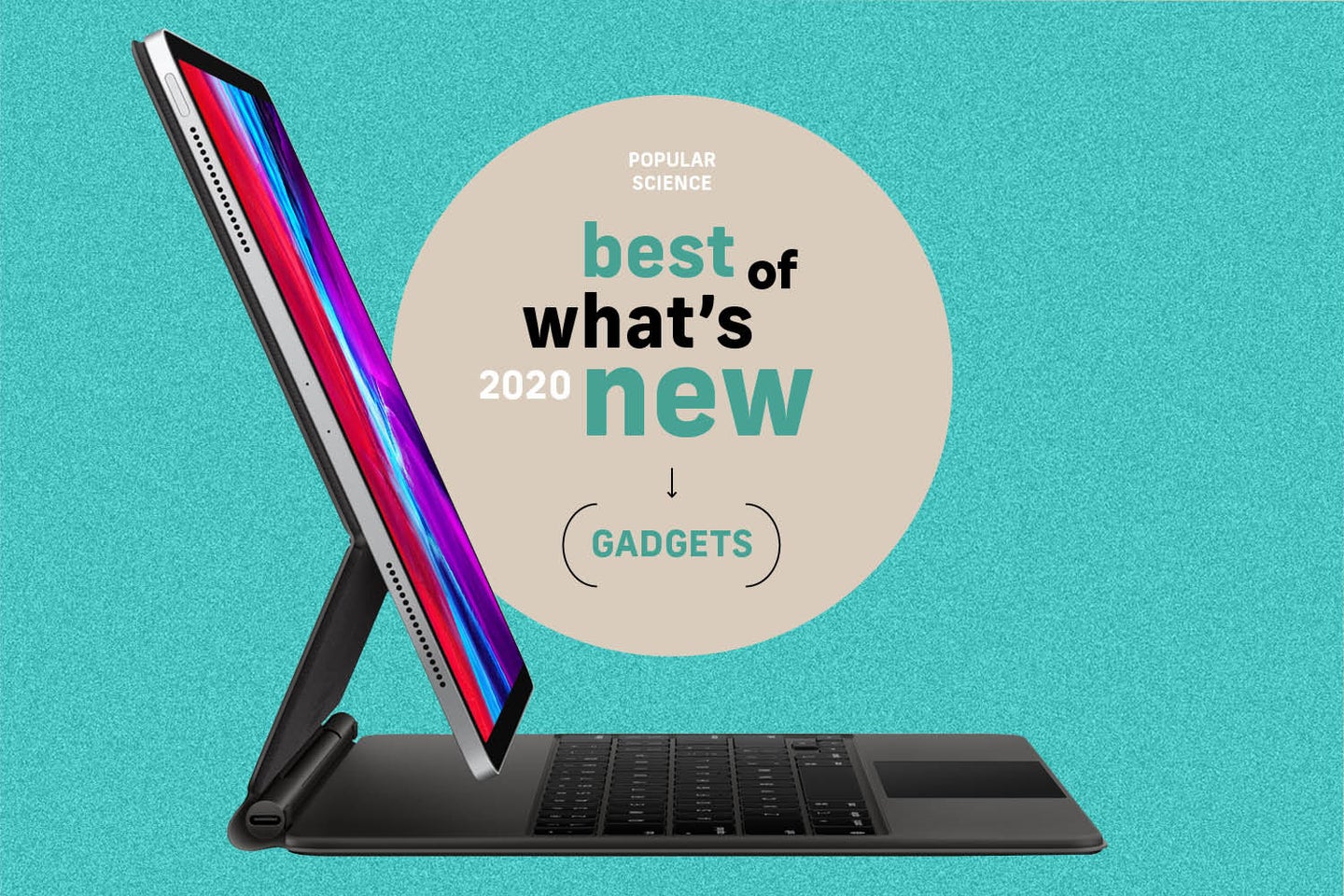 The year's most important developments in the world of gadgets. Apple
SHARE

Every year we demand more and more from our gadgets. We expect new models to come with a boost in power, improved efficiency, and a list of fancy new features that look good on a spec sheet. Those upgrades typically come with a price hike, but several of this year’s honorees manage to offer exciting tech upgrades for considerably less money than their predecessors or competitors. But don’t worry—we’ve got a few special splurges in here, too.

One giant leap for gaming

We’re used to computer hardware getting incrementally better—and more expensive—every year. In September, NVIDIA knocked the cycle for a loop with its RTX 3080 graphics cards. At $699, the 3080 is 30 percent cheaper than its $999 predecessor, yet it churns out more than double the power. That translates into 4K gaming at high frame rates that would choke the most powerful card from just a year ago. The new card is burly enough to enable 120 frames per second performance in VR headsets like the Valve Index for super-smooth motion during any task. It also cuts down rendering times on 3D modeling or video projects by 20 percent or more. Nvidia crammed in all that speed by totally redesigning the GPU’s architecture and shrinking the computing cores to fit more than double the number. The company even had to overhaul the built-in cooling system with a two-fan design and enormous radiator fins to pull heat as you put it through its paces. In short: The GPU bar jumped more in 2020 than it has in generations.

Turning the iPad into a legit laptop competitor

Trying to balance most iPad keyboard cases on your lap is an uncomfortable experience—precariously propping up your pricey tablet in the airport waiting area is less than ideal. Apple engineered a cantilevered arm on its Magic Keyboard that can firmly hold an iPad Pro or iPad Air at any angle, from upright to reclined, depending on your task or seating arrangement. The new scissor mechanism under each backlit key also provides a plush 1mm of travel for satisfying key presses—without suffering the durability issues of Apple’s ill-fated butterfly keys. Plus, the Magic Keyboard has a built-in USB-C port that through a charger to your iPad as soon as you connect it via magnetic mount.

Though high-end TVs are just starting to dip their toes into the world of 8K ultra-HD playback, Blackmagic’s cinema camera is already pulling down 12K video, which gives each frame nearly 80 megapixels with a 12,288 x 6,480 resolution. That clarity has its uses even while cinephiles wait for screens to catch up. For instance, shooters can use all those pixels to shoot more detailed 4K or 8K footage, or record in full resolution and crop during post-production without compromising image quality. And because of Blackmagic’s new hyper-efficient compression algorithm, you don’t need a desktop that costs more than a family sedan to process the footage: A high-end laptop can handle the editing just fine.

Asus teamed up with AMD to create the first laptop with this year’s super-fast 4900HS chip inside. Paired with Nvidia’s RTX 2060 graphics card, the 3.5-pound Zephyrus cranks out computing power levels on par with a gaming desktop. The 14-inch screen has a 120 Hz display, and the NVMe solid-state drive moves data with no lag. And despite all of its muscle, the Zephyrus still manages to provide more than nine hours of battery life for everyday tasks, which puts it in a class of its own when it comes to balancing power with overall usability.

Wireless charging that snaps into place

Wireless charging works best when you place the device directly over the induction coil. Apple ensures that the new iPhone 12 and its MagSafe connector will hit the sweet spot every time by using a ring of powerful magnets to perfectly line up the charger and cellular device. The attraction is so strong that you don’t have to remove accessories like cases and compatible card wallets. The optimized alignment also leads to less heat build-up, and up to 50 percent faster charge times compared to a typical wireless mat.

Voice commands that don’t get lost in translation

Some users—particularly those with visual impairments or mobility issues—rely on voice commands to handle just about every task on their phone. Typically, this requires the operating system to assign numeric values to every element on screen. But the Android 11 can parse what’s happening on the display, allowing users to refer to apps by name instead of having to parse arbitrary figures. This kind of semantic parsing also allows the software to identify and interact with individual elements of web pages—like images and text fields—for easier navigation around the web. It already works with impressive accuracy across a wide variety of apps, and its capabilities should expand in future generations.

The more often your phone screen refreshes, the smoother it will look as you swipe around your device. That’s easy on the eyes, but tough on the battery. Samsung’s variable frequency display, which debuted with the Galaxy Note 20, can refresh its screen up to 120 times per second during motion-intensive activities like scrolling or gaming. (That’s twice the frequency found in most phones.) But if you’re looking at a static image or reading text, it automatically drops all the way down to 10 refreshes per second to reduce battery usage by up to 60 percent. Even without adjusting smooth motion, the smart OLED display promises more than 20 percent overall power savings compared to the average screen, meaning you’ll actually be able to enjoy those buttery visuals without feeling tethered to a power source.

Colorful e-readers for the real world

The black and white, slow-refreshing displays commonly found in e-readers rely on a technology called E Ink, which has a few advantages over typical screens. First, it’s much more efficient in terms of battery life. Second, the sharp text is easier to read without fatiguing your eyes. But the big downside is the lack of color. That changed this year with E Ink’s Kaleido tech, which showed up in a variety of 2020 e-readers (including the one pictured above from PocketBook). Kaleido screens offer 4,096 colors thanks to a filter array that sits above the typical ink layer and creates different hues—similar to how many HDTVs work. This basic concept has been floating around for longer than a decade, but this is the first time color e-readers have been ready to hit the market as anything other than a disappointing novelty.

If you extended the curve of Samsung’s 49-inch-wide G9 monitor to make a complete circle, it would have a radius of three feet—a measurement represented as 1,000R. That’s a much more substantial arch than a typical curved display, which usually clocks in around 1,800R. The design roughly matches the shape of your eye, so the display naturally fills your field of view without making you strain to see the edges. Beyond its shape, the G9 also promises a speedy 1-millisecond response rate as well as a 5,120 x 1,440 resolution—enough to fit dozens of TweetDeck columns for maximum doom scrolling.

Lenovo spent more than four years developing its folding ThinkPad, which uses a bendable tablet screen to mimic a laptop’s hinging shape. The OLED display has been tested to safely open and close more than 30,000 times. Fully open, it works as a 13.3-inch HD tablet. Or collapse it in half and snap in the magnetic keyboard—which stows away in the folded screen during transport—and you’ve got a full-fledged Intel-powered laptop. The X1 Fold promises up to 8.5 hours or regular usage on a single charge, and has been tested at the same grueling toughness standards as Lenovo’s other burly ThinkPad machines.

Most people probably don’t need a bonafide 360-degree camera—but Insta360′s modular system offers a more reasonable gadget for everyone by pulling double duty. With the action camera mod clipped in, it’s a full-featured 4K rig that’s waterproof down to 15 feet. Swap in the 360-degree mod for a pair of lenses that capture 5.7K surround footage that you can watch later with a VR headset or on a VR app like YouTube’s. Alternating between the two get-ups is as simple as playing with Legos.