When science and art intersect 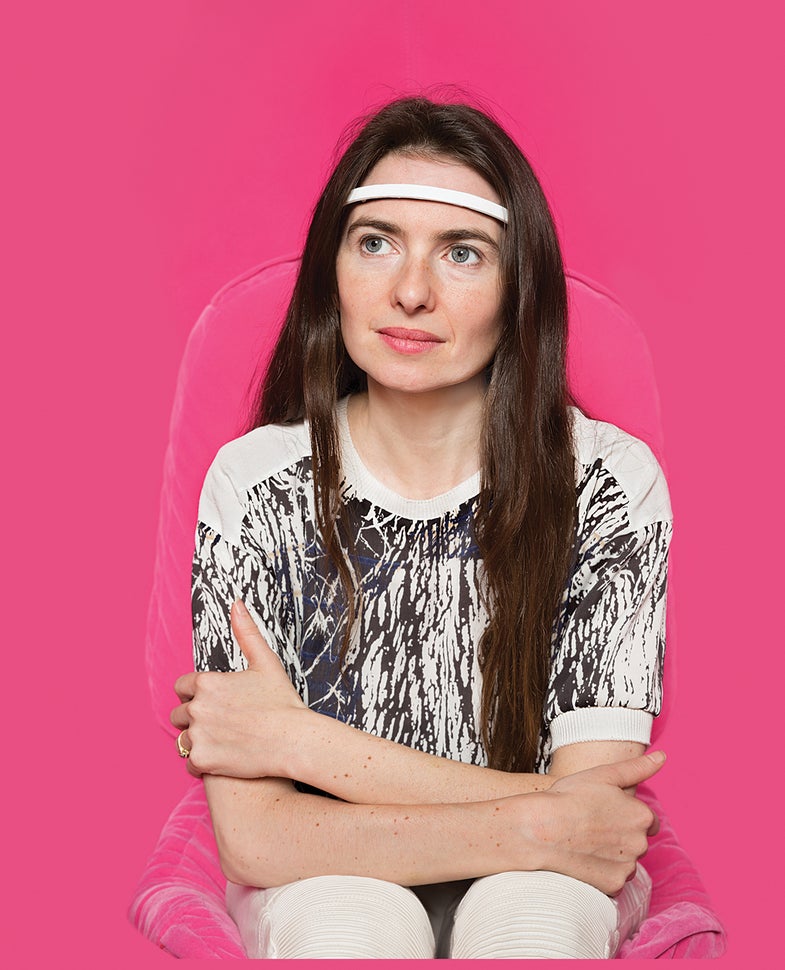 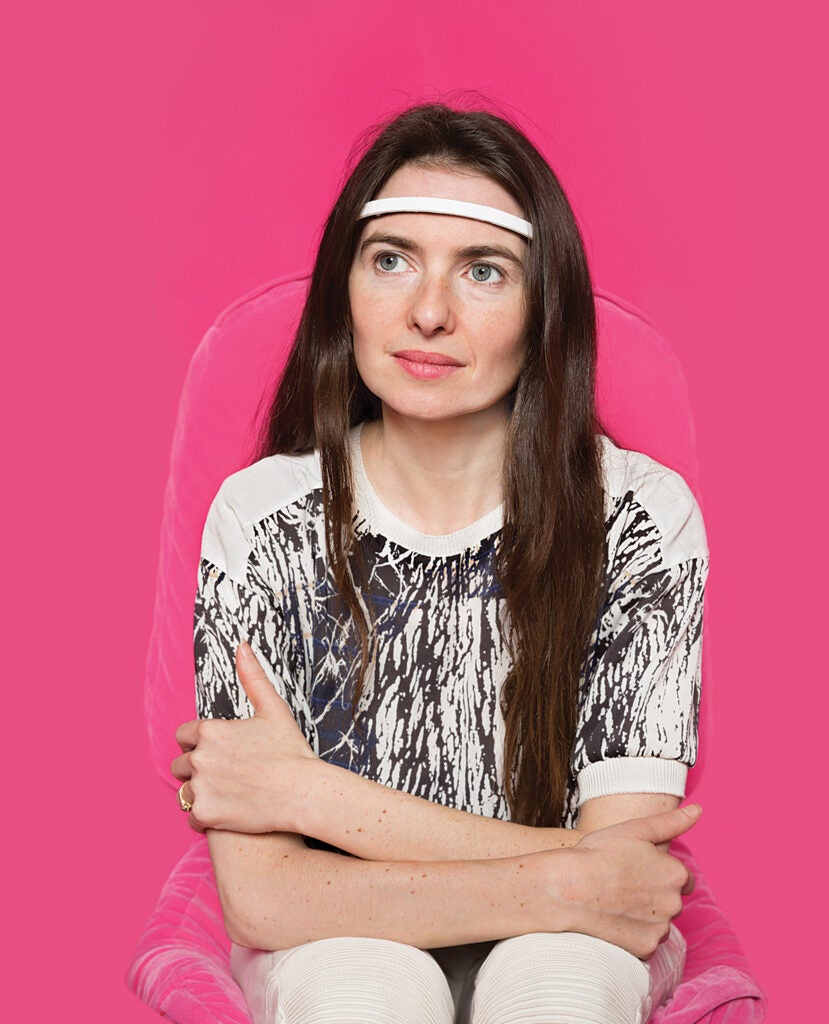 In college, Ariel Garten started a clothing line that took its inspiration from neuroscience. She hooked people up to an electroencephalograph (EEG) to record their brain waves, then emblazoned T-shirts with the spiky patterns reflecting their mental activity. She also sewed skirts with 37 pockets, a reference to the number of different brain faculties described in the Victorian pseudoscience of phrenology, and filled them with bric-a-brac to represent the subconscious. At age 34, Garten is still making geek-chic designs—only now her creations can actually read people’s minds.

Garten is shoeless as she leads me through the Toronto headquarters of InteraXon, the start-up she co-founded in 2007. Her long brown hair nearly brushes her elbows as she pads along the wood flooring in brightly patterned socks. A whiteboard scribbled with nerdy wordplay and equations spans the length of one wall; neon Post-its are applied liberally elsewhere. Garten pushes open the door to a conference room called the Cerebroom and takes a seat at the table.

“I was always exploring relationships between art and science,” she says. During her stint as a fashion designer, Garten was double-majoring in psychology and biology at the University of Toronto, where she also began working with professor Steve Ma­nn. A pioneer of wearable computers, Mann created digital eyewear to augment vision in the early 1980s. (“He basically developed Glass before Google,” Garten says.) Mann had also engineered a primitive brain-computer interface at MIT in the 1990s. Garten and some classmates decided to resurrect it to explore thought-controlled computing.

As a pilot project, the team produced a series of concerts at which audience members wore a version of the device. By manipulating their brain states, the spectators could influence the pitch and volume of synthesized instruments on stage. “We kept getting deeper and deeper into brain-wave technologies and what we could do with them,” Garten says. As they grew more ambitious­—at points inventing a thought-controlled beer tap and levitating chair—the team formed InteraXon. For the 2010 Winter Olympics in Vancouver, they created an installation in which visitors could use a headset to control light displays on landmarks across the country, including Toronto’s CN Tower, Ottawa’s parliament buildings, and Niagara Falls, in real time.

“After the Olympics, we began looking at more complex applications,” Garten says. “And we realized we had a system that allowed you to form a relationship with technology.” InteraXon then set to work developing, in essence, a Fitbit for the brain—a wearable biofeedback device that measures neural activity, much like an activity tracker records steps and calories burned. “I think we’re all very curious about our own minds,” says Garten, “but we just may not have the tools to channel that.”

I think we’re all very curious about our minds, but we just may not have the tools to channel that.

Garten passes me a sleek white headband called the Muse, the company’s first commercial product. The human brain contains billions of neurons that communicate via electrical impulses, and aggregate into waves of different amplitudes: Alpha, for instance, dominate when we’re relaxed or focused; beta kick in we problem-solve. The Muse transforms this brain activity into information that can be tracked wirelessly on a tablet or smartphone.

Muse is intended for daily use with an app called Calm, which features a three-minute exercise designed to help people manage stress. Through headphones, users can hear their brain waves represented as the sound of wind. Calm states beget gentle winds; distracted or agitated states elicit a roiling tempest.

Psychologists at Harvard University have shown that people spend 47 percent of their waking hours thinking about something other than whatever it is they’re trying to focus on. Neuroscientists call this tendency toward mental drift the “default mode network.” With neurofeedback, Garten believes people can build their cognitive strength. “If you’re having a crappy day, it can help you gain control of your mind,” she says. “Like, ‘I’m not calm now, but I know what to do to get there.’ ”

The Calm app follows in the tradition of the Buddhist principle of awareness, and the instructions it issues are similar to the Japanese Zen breath-counting meditation known as susokukan. Mindfulness, as such practices are popularly known, has been a growing focus of Western empirical research. The National Institutes of Health, for example, has funded dozens of studies that test mindfulness techniques.

Because InteraXon emphasized comfort when designing Muse, the device could be a valuable tool for scientists conducting such research. Norm Farb, a doctoral candidate in experimental psychology at the University of Toronto, is developing a six-week pilot study to measure the extent to which Muse can help control stress. “A lot of my research has looked at meditation and yoga, and there’s evidence that these can work for people with a mood problem,” Farb says. “So can Muse be training wheels for that?” With McMaster University in Ontario, InteraXon is examining how Muse can improve cognitive function, and an education lab at New York University is measuring the effect of Muse on learning.

There’s an obvious irony to the notion of computer-aided meditation. Many seek practices like mindfulness as an antidote to the distractions of today’s technology. We unplug to find calm. Garten appreciates this but says that sometimes people need a more accessible tool to achieve focus. “There are potential places that technology can take us that we can’t reach on our own,” she says.

Using InteraXon’s software, anyone can design compatible apps. Garten envisions a broad array of possibilities, including apps that treat children with attention-deficit hyperactivity disorder and help athletes prepare for games. Eventually companies might get alerts when the brain waves of workers in high-stress jobs, such as air-traffic control, signal fatigue.

We leave the Cerebroom and walk past engineers conferring around workspaces cluttered with cables and prototypes. In the center of InteraXon’s office, a sitting area contains two egg-shaped chairs with speakers at ear level. Garten settles into one and gestures for me to take the other. “Imagine coming home and Muse senses you’ve had a stressful day,” she says, “and so the lighting adjusts and your home stereo starts playing your favorite relaxing music.” Garten sinks back into the chair with a slight, serene smile and closes her eyes.

How It Works: Muse

InteraXon’s Muse is among the first wearable computers that read brain waves, much like a heart-rate monitor detects a pulse. CEO Ariel Garten says it can train users to achieve greater focus anytime, anywhere. 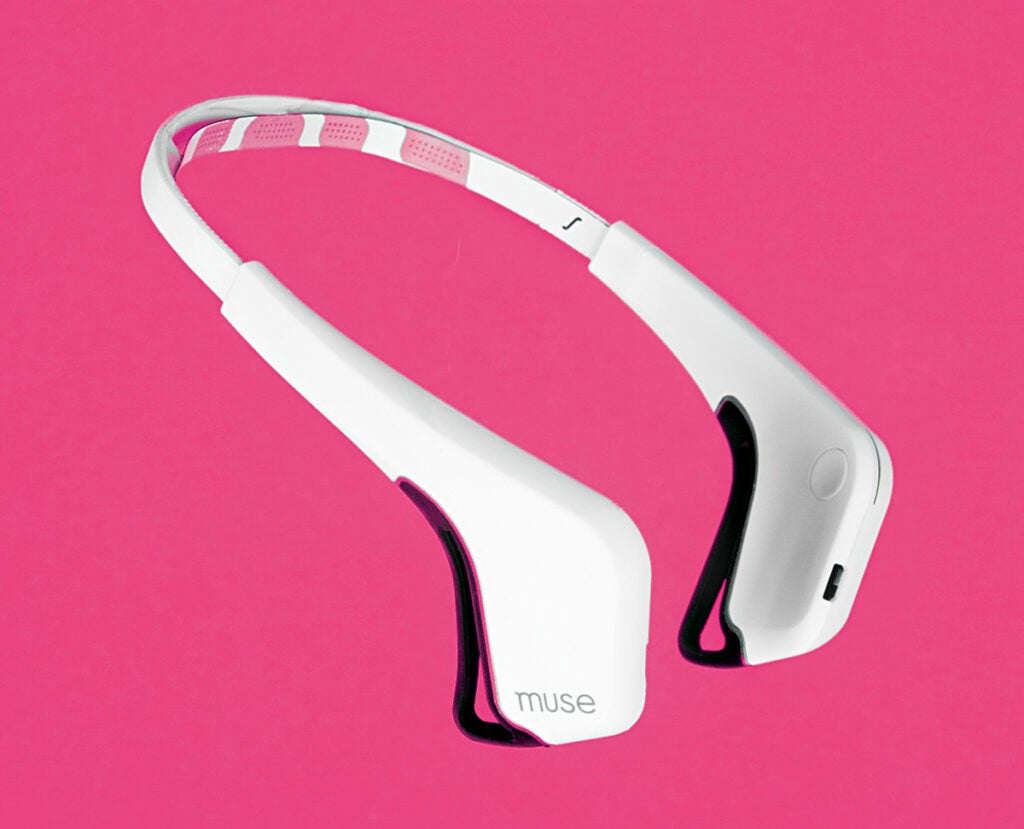 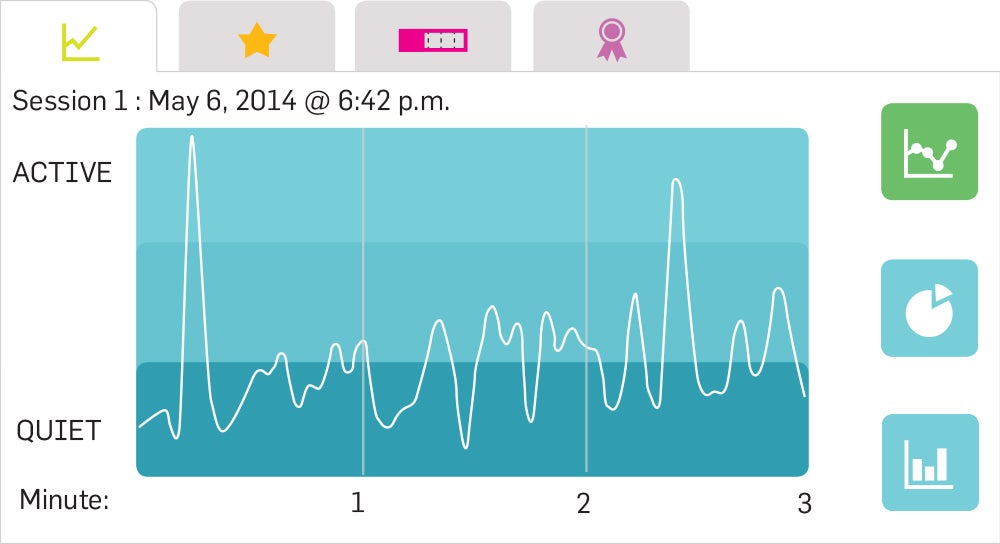 Calibration: Once placed on a person’s head, Muse’s seven EEG sensors amplify and measure the neural oscillations that generate brain waves to establish a baseline for the session.

Instruction: The device sends data to a corresponding app via Bluetooth. The app instructs the wearer how to focus on breathing to create calm. It then takes 250 measurements per second and analyzes the data to determine if the wearer is focused or distracted.

Practice: If focused, a beach scene on a tablet or smartphone will portray calm. As the mind wanders, conditions on-screen deteriorate. Maintaining a calm state for an extended period is rewarded with the sound of chirping seabirds.

Results: When the session ends, the app shows how much time has been spent in calm, neutral, and active states. The app is game-ified, and a calm state earns points. It also tracks results over time, incentivizing the wearer to learn how to control stress.