COVID-19 tests are far from perfect, but accuracy isn’t the biggest problem

Here’s what all those false positives and negatives really mean. 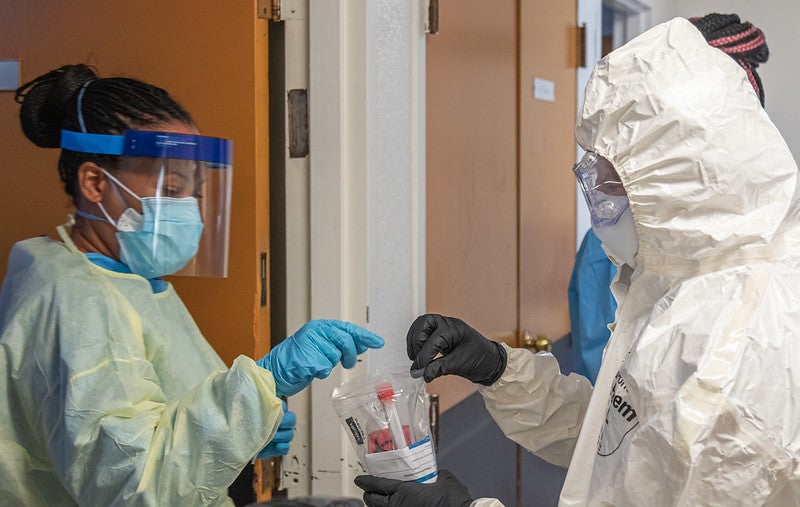 Maureen Ferran is an associate professor of biology at Rochester Institute of Technology. This story originally featured on The Conversation.

Widespread testing for the SARS-CoV-2 virus is important to both slow the virus and gain information about how widespread it is in the US. But a second aspect of testing has gotten less attention: accuracy.

It’s surprisingly hard to determine how accurate a coronavirus test is, identify the cause of any inaccuracies and understand how inaccuracies affect the data public health officials use to make decisions.

There are two main types of test in use. The first is a reverse-transcription polymerase chain reaction test, or RT-PCR. This is the most common diagnostic test used to identify people currently infected with SARS-CoV-2. It works by detecting viral RNA in a person’s cells—most often collected from their nose.

The second test being used is called a serological or antibody test. This test looks at a person’s blood to see if they’ve produced antibodies for the coronavirus. If a test finds these antibodies, it means a person was infected and made antibodies in response.

Hearing that some tests for the coronavirus are only about 70 percent accurate can be unsettling. I am a molecular biologist who studies viruses, and a lot of people are asking me what this inaccuracy means and why the tests aren’t better.

What makes a medical test accurate?

The accuracy of a medical test is determined by measuring two things: sensitivity and specificity.

RT-PCR tests are considered the gold standard for detecting many viruses, and a number of companies are making them.

Researchers at the Foundation for Innovative New Diagnostics, a nonprofit research center in Geneva, Switzerland tested five COVID-19 RT-PCR tests and found that all five achieved 100 percent sensitivity on positive samples, and at least 96 percent specificity on negative samples in a laboratory setting.

In the real world, testing conditions and process are far from perfect, and accuracy suffers. Researchers still don’t know what the real-world false positive rate is, but clinical sensitivity of RT-PCR tests ranges from 66 to 80 percent. That means nearly one in three infected people who are tested will receive false negative results.

Most experts believe that problems with sample collection are the main culprit behind inaccurate testing. False negative results are likely occurring because health care providers aren’t collecting samples with enough of the virus for the tests to detect.

This can happen because someone doesn’t insert a swab deep enough in the nose or doesn’t collect enough of the sample. False negatives could occur if a person is tested too early or too late during their infection and there isn’t a lot of virus in their cells. And finally, errors can happen if a sample sits too long before being tested, which allows the viral RNA to break down.

This relatively high risk of false negatives is why doctors don’t just rely on a test to determine if a person has the coronavirus. If a person presents with classic symptoms of COVID-19 and is in an area with an outbreak, doctors will often diagnose a person with the disease is spite of a negative test.

Serological tests are good, but need to be exceptional

While RT-PCR is the gold standard due to its accuracy, the slow speed and difficulty of sample collection are weaknesses. In contrast, tests looking for signs of the virus in blood—called serological tests—can give results in less than an hour and require only a simple finger prick. These tests look for evidence of an immune response to the virus—not the virus itself—by testing for antibodies that fight the coronavirus in a person’s blood.

Recently, researchers from the University of California compared 10 serological tests. The sensitivity of the tests was mostly above 90 percent, but specificity is more important when checking for evidence of past infection. Although this hasn’t been proven for SARS-CoV-2, antibodies, in theory, would suggest immunity to the coronavirus. False positives then would tell a person they are safe when they aren’t.

Several of the tests had clinical specificities over 98 percent, and one of the authors of the UC paper called those tests “critical for reopening society.” But some experts have criticized the optimistic tone of the study. If only 5 percentt of the population have antibodies, a test with 99 percent specificity still produces 16 percent false positive results.

Problems with timing, lack of regulation

It takes one to two weeks for a patient to produce antibodies to a virus, so there may not be enough antibodies in the blood to be detected by a serological test if it’s taken too soon after infection. This also means these tests should not be the main test used to diagnose someone with a current infection.

According to the World Health Organization, it’s possible that the current antibody tests may cross-react with other human coronaviruses, resulting in false positives.

Another potential issue is that asymptomatic people and those with mild symptoms, may produce fewer antibodies to the virus than sicker people. Therefore, a serological test that can accurately detect antibodies in severely ill patients may be less able to identify patients with fewer antibodies in their blood. Much like the RT-PCR tests, this would result in false negatives.

Finally, another reason for the high false positive rates is that the U.S. Food and Drug Administration requirements were relaxed to allow rapid development of antibody tests. Companies are now allowed to sell tests without first having their data evaluated by the FDA.

Neither the PCR nor serological tests are perfect, but they’re far better than nothing and offer incredibly valuable information to medical professionals, public health experts, and the people that get tested.

Even with the current uncertainties, at this time our primary challenge isn’t the accuracy of the tests but the fact that not enough people are being tested.