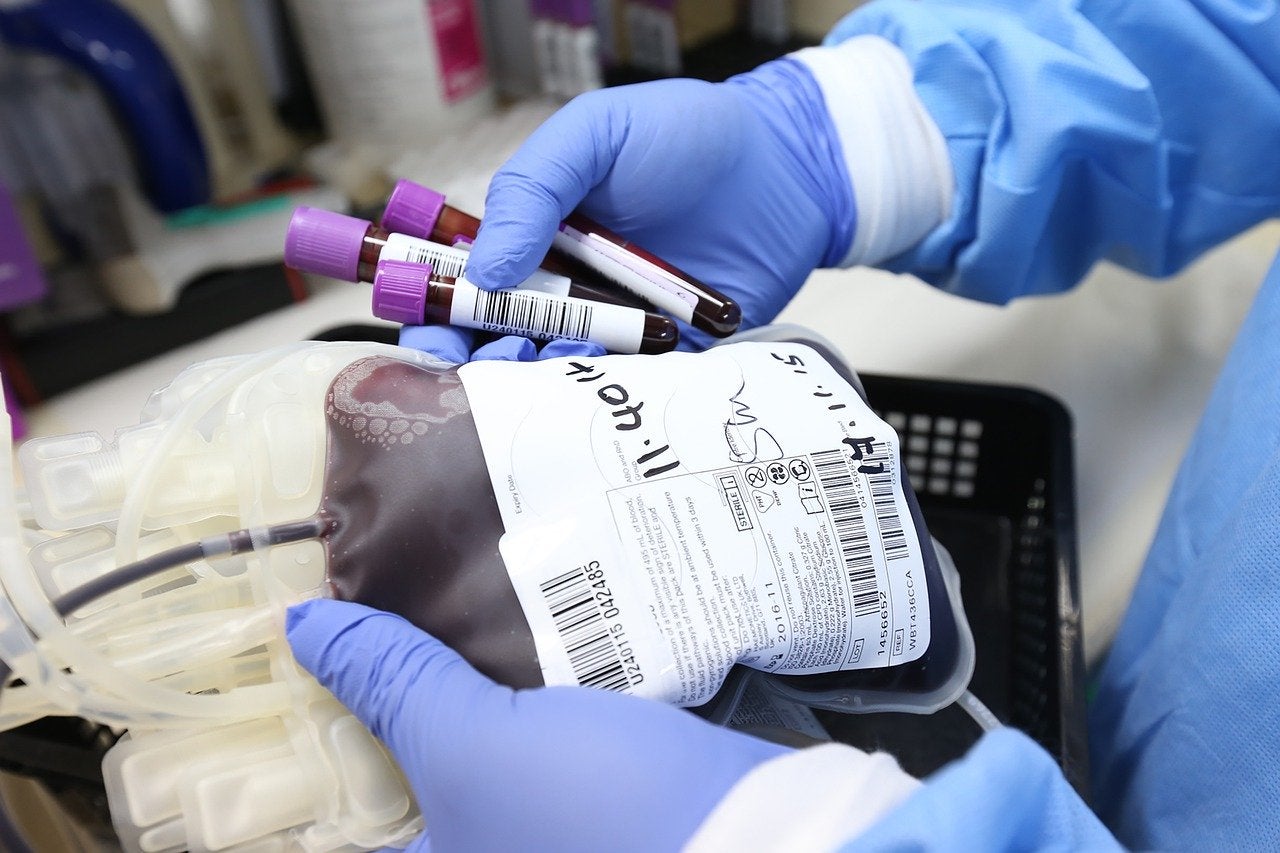 All US blood donations get tested for HIV and other transmittable illnesses. But a sexual-orientation questionnaire, which some say is prejudiced, serves as a second screener. Ahmad Ardity/Pixabay
SHARE

It took until mid-April for Jack Turban to feel like he had his life back. A few weeks earlier, a cough and slight runny nose morphed into a splitting headache and chronic exhaustion. Turban, a resident physician in psychiatry at Massachusetts General Hospital, soon tested positive for COVID-19.

During his recovery, he came across reports on convalescent plasma transfusion, an experimental therapy that boosts the immune responses of those suffering from severe coronavirus infections. Blood centers urged recovered patients to donate their plasma, the protein-filled, yolk-colored liquid that may contain COVID-19 antibodies, which can potentially save lives and beat back the disease.

But as Turban soon found out, the Food and Drug Administration (FDA) bans men who’ve had sex with other men in the last three months from donating their blood, even during a global health crisis.

The FDA’s guidelines have long prevented gay and bisexual men like Turban from being donors. In 1983, in response to the growing AIDS epidemic, the agency enacted a lifetime ban against men with same-sex preferences from giving blood. In 2015, the FDA changed their policy, requiring that gay and bisexual men practice celibacy for a year before donating. On April 2, the FDA shortened this period to these months to address blood shortages during the pandemic.

The policy, according to Turban, both stigmatizes LGBTQIA+ people and exacerbates the country’s severe blood shortage. Virtually all blood drives have been cancelled during the pandemic, says Kate Fry, CEO of America’s Blood Centers, and while most organizations are still accepting donations with social-distancing measures in place, collection levels are extremely low. The Red Cross, which provides 40 percent of the nation’s blood supply, saw its inventory slashed in half. Vitalant canceled 6,800 blood drives, losing 175,000 pints of blood since March.

The origins of the blood ban

In 1981, five previously healthy gay men in Los Angeles contracted a rare lung infection called Pneumocystis carinii pneumonia. Hundreds of cases soon spread across the nation, and by the end of the year, 318 people had died of the condition, called acquired immunodeficiency syndrome or AIDS. Eighty-five percent of them were gay and bisexual men.

After two years of confusion, scientists finally pinpointed the disease to be bloodborne, leading the FDA to set rules of refusal again gay and bisexual men and intravenous drug users. Donation centers implemented questionnaires that routinely asked potential donors about their sexuality and substance use.

In late 1983, scientists isolated the virus behind AIDS. Within two years, blood banks were all applying the first HIV test, named enzyme-linked immunosorbent assay or ELISA, to all the samples they collected. The analysis successfully detected HIV antibodies 96 to 98 percent of the time. Paired with another test, called the Western Blot, ELISA was nearly perfect—except for one troubling flaw. During a six- to eight-week “window period” right after infection, the virus proved undetectable.

Since then, better methods of detection have winnowed the “window period” down to 7 to 14 days. The fourth-generation HIV test, introduced in 2010, detects both antibodies and antigens, which develop faster in the immune system.

Although fatality rates have sharply decreased, the AIDS epidemic is far from over. Gay and bisexual men are still the most vulnerable population, representing 69 percent of an estimated 38,000 new infections in the US each year. But new blood-screening technologies have also drastically reduced the risk of HIV transmission through transfusions, causing many experts to call for the removal of the FDA’s three-month celibacy policy.

The debate around the testing window

So what is the possibility of contracting HIV from a blood transfusion today? “One in 1.5 million,” says Jared Kirchner, chief medical officer at the American Academy of HIV Medicine. “It’s not zero, but it’s pretty darn low. The last time a recipient of a blood transfusion contracted HIV was in 2008—more than 12 years ago.

Katharine Bar, an assistant professor at Perelman School of Medicine at UPenn, claims that the days-long waiting period for antigens and antibodies is not as risky as many think. “The window period is relevant when we’re diagnosing individuals for HIV, but less relevant when we’re screening blood donations,” she explains. “The virus hasn’t gotten to the point where it’s in the systemic circulation.”

Yet the FDA continues to use the window period as its argument against abolishing the donation ban for gay and bisexual men, says Brain Custer, a director of epidemiology and policy science at Vitalant Research Institute. Part of that rigidness stems from the limits of modern sampling. When a donor’s blood undergoes screening, a small dose is taken from the 500 mL bag. That means a small sample could test negative for HIV infection, even if the larger source is positive, Custer says.

In those cases, the sexual-history question stands in as a back-up screening measure. The FDA policy will remain in place until the risk of removing the survey can be adequately measured, Custer says—an endeavor he and the agency are about to take on. They plan to launch a six- to nine-month study in July or August to investigate the risk of eliminating time deferrals at blood centers nationwide. With help from LGBTQIA+ groups and donor organizations like the Red Cross, they’ll beta test a new questionnaire on 2,000 gay or bisexual men. How many sexual partners have they had? Do they use protection? Do they take prophylactics? This new pool of information, combined with the regular blood tests, will help Custer and other health experts determine if the decades-old questionnaire can finally be swapped.

GLAAD, a nonprofit promoting the rights of LGBTQIA+ folks, has spoken out against the FDA’s impending study, however. “The FDA is placing American lives on the line as they debate stigma, not science,” the group’s president and CEO Sarah Kate Ellis said in a press release. “During the current crisis, the FDA is wasting time and money on a pilot study when all the scientific research and medical authorities plainly state that gay and bi men should not be restricted from donating blood,” An open letter issued by GLAAD, signed by 500 medical professionals, notes that the agency’s reduction of the 12-month ban is a “step in the right direction” but still “does not go far enough in reversing the unscientific ban.”

Inching forward in the 21st century

As the FDA slowly starts up its investigation, blood banks are still struggling to implement the special three-month time deferral policy. The FDA released an updated behavioral questionnaire on May 5 for all donor centers to use. By May 15, all OneBlood locations were accepting contributions from gay and bisexual men who followed the three-month abstince period, spokesperson Susan Forbes tells PopSci. Centers run by Vitalant, the second-largest blood collector in the US, won’t be open for the same donor group until August, the company’s chief of marketing Cliff Numark says. Meanwhile, America’s Blood Centers is staggering the rollout: The New York Blood Center updated its questionnaire on June 1, but hundreds of other sites are still operating under old guidelines. The Red Cross didn’t respond in time for comment.

“Most people assume that it should be implemented immediately,” Fry of America’s Blood Centers explains. “They say, why can’t I donate today? People don’t realize the process that blood centers have to go through to implement this. We need to change the computer system, conduct training, and revise questionnaires.” She suggests donors should call ahead of time to ensure they won’t be turned away at the doors.

A question of bias

“I don’t see a necessity for that sexual orientation question,” Kirchner from American Academy of HIV Medicine says. “They’re still going to screen everyone’s blood.” He thinks that an individual risk assessment with specific questions about donor health, sexual behavior, and drug use would be a better option because it skirts the charged and often discriminatory dynamics around sexual orientation.

As the FDA takes baby steps toward reassessing its blood-donation restrictions on gay and bisexual men, the LGBTQIA+ community continues to advocate against what they call is a discriminatory and homophobic policy. GLAAD issued a petition in March for the FDA to eliminate its time deferral rule for men who have sex with men, garnering more than 25,000 signatures by the end of April. Other countries have eliminated similar bans in the last few years, including Mexico, Brazil, Argentina, Italy, Russia, South Africa, Spain, and Hungary.

Even with the COVID-19 update, the time deferral keeps many potential donors away from blood centers. Gary Saperstein, who operates a vineyard in California that boosts LGBTQ+ movements, says can’t donate blood because he’s gay and sexually active. “I’ll be turned away,” he explains. “I live with that in my life. It’s just another discriminatory act against people in the LGBTQ community.”

Turban, the resident from Massachusetts General Hospital, also continues to speak out against the FDA’s ban. “It perpetuates societal homophobia and sexual shame,” he says, “both of which are key determinants of mental health problems among gay and bisexual men.” He argues that these archaic medical policies stigmatize an already stigmatized population, turning away healthy blood donors when the country needs it the most. “This sends a damaging message to gay and bisexual men,” Turban says. “You can only be a good charitable person, the kind of person who donates blood, if you don’t have sex.”

Correction: Due to an editing error, the full name for AIDS was misrepresented as auto-immune deficiency syndrome. The article has since been updated.