Airway splints save lives, then dissolve 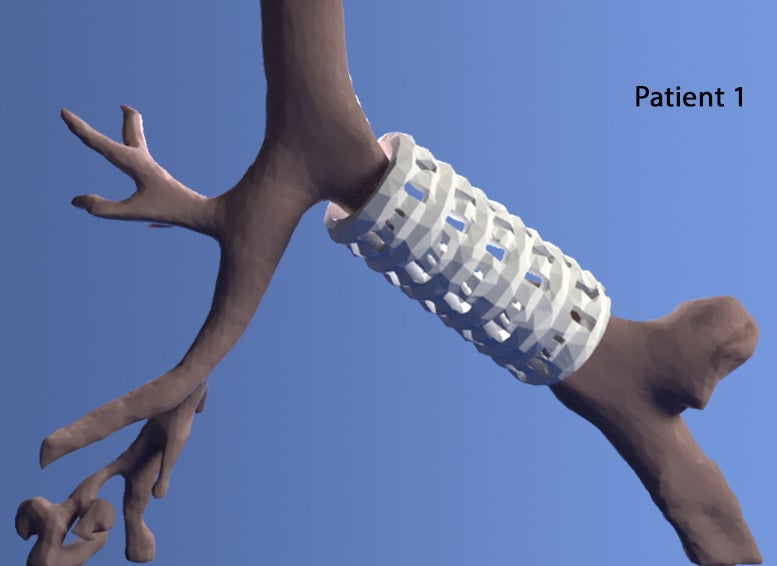 3D aficionados have been printing everything from candy to guns, and the technique has been making its way into the biomedical realm, generating everything from functional organs to prosthetics. In 2012, a team of researchers from the University of Michigan implanted splints 3D-printed out of a special biomaterial in the airways of three children with tracheobronchomalacia, a condition that may cause their airways to spontaneously collapse. The customized splints have done more than just keep the boys alive—they are flexible enough to allow the children to continue healthy growth so that they may no longer need respiratory intervention. The researchers published their work today in Science Translational Medicine.

“The device worked better than we could have ever imagined,” Glenn Green, a pediatric otolaryngology professor at C.S. Mott Children’s Hospital and the study’s senior author, said in a press release. “We have been able to successfully replicate this procedure and have been watching patients closely to see whether the device is doing what it was intended to do. We found that this treatment continues to prove to be a promising option for children facing this life-threatening condition that has no cure.”

Typically, children born with tracheobronchomalacia don’t have many treatment options. Their airways can be kept open with surgically implanted silicone tubes or mesh, part of the trachea can be removed, or patients can be kept on mechanical ventilation. Children are most at risk in the first 24-36 months, after which the airways can often grow enough to resist collapse. So the researchers thought that, if the condition could be treated early enough, patients could avoid some of the life-threatening complications such as cardiac arrest and an inability to absorb nutrients from food.

For all three patients, the researchers created 3D-printed splints made of polycaprolactone, a biodegradable polyester designed to be reabsorbed by the body in three years. Using CT scans, they printed them in the exact shape of the patient’s trachea. Then the researchers surgically implanted the splints, sewing them around the trachea and bronchus to help guide them as they grow, and checked on them periodically with MRI and CT scans.

This is a small number of cases and, though these patients didn’t have any complications, the researchers note that there may be complications that they haven’t seen yet, so they are planning a clinical trial to test the device on less severe cases of tracheobronchomalacia. But for the three boys who have been the first to receive it, the device has saved their lives. Now, the first child who received the splint in 2012 is perfectly healthy. The splint is dissolving just as it’s supposed to, and the researchers hypothesize that soon there will be no sign that the child ever even had the condition.