A skyscraper-sized asteroid will zoom within 1.43 million miles of Earth tonight 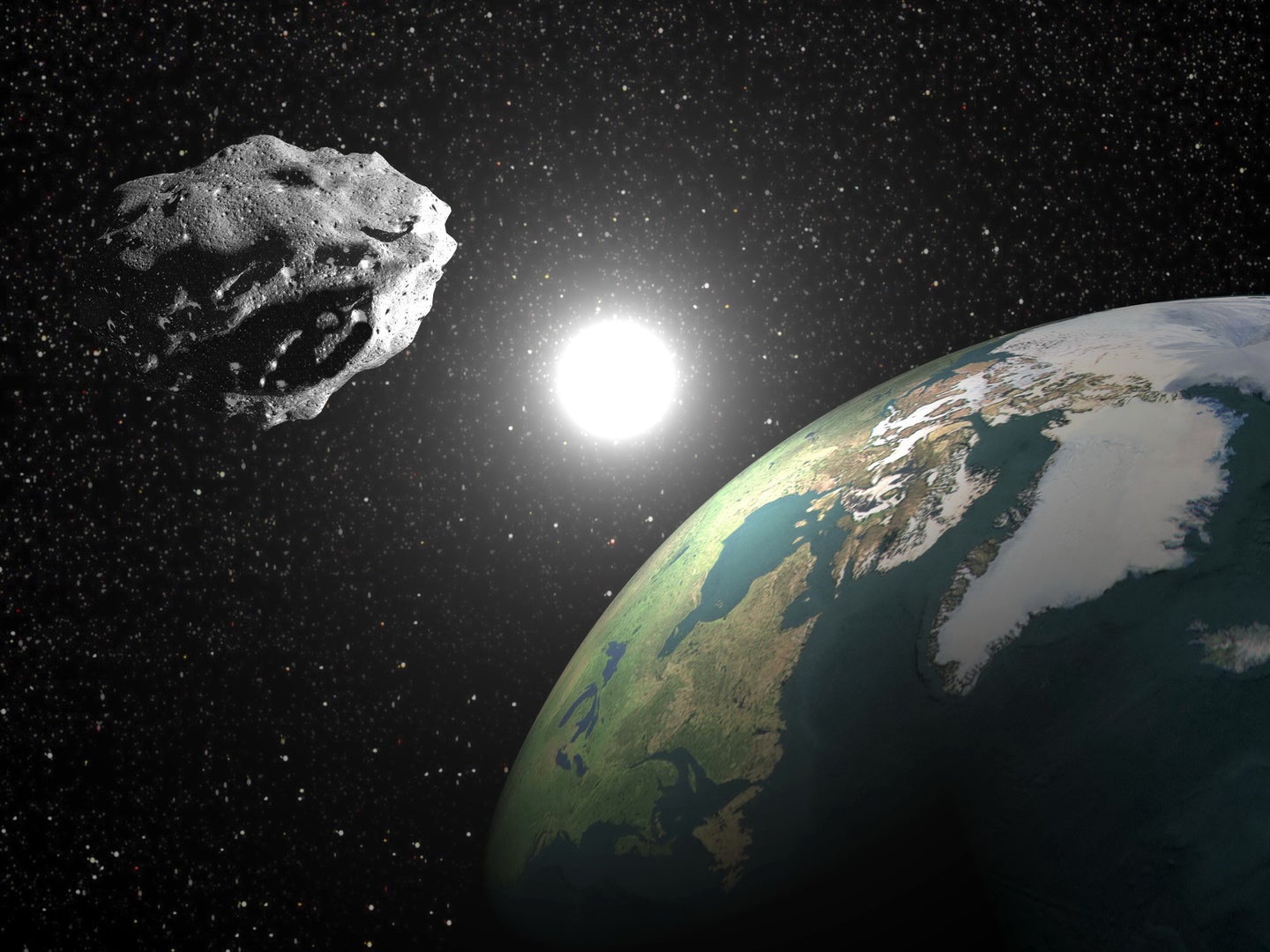 An artist's rendering of a near-Earth object. Deposit Photos
SHARE

Witches and ghosts won’t be the only things whizzing through the sky on Halloween night. A giant asteroid will also be flying about. 2022 RM4 is a newly discovered asteroid that astronomers say doesn’t cause any immediate danger, but it is still deemed “potentially hazardous” by NASA.

According to NASA, the giant space rock has an estimated diameter of 1,083 and 2,428 feet (330 and 740 meters). This is just under the height of the tallest building on Earth, Dubai’s 2,716-foot-tall (828 m) Burj Khalifa. It will zoom by at about 52,500 mph (84,500 kilometers per hour) and be 1.43 million miles (2.3 million kilometers) away at its closest approach, or roughly six times the average distance between the Earth and our moon. That may sound like a lot, but it’s a slim margin by cosmic standards.

NASA flagged any space object within 120 million miles (193 million km) of the planet as a “near-Earth object.” They also categorize any large body within 4.65 million miles (7.5 million km) of Earth as “potentially hazardous.” Astronomers closely watch these objects and use radar to study them for any signs of change from their projected paths.

In 2017, NASA brought the Asteroid Terrestrial-impact Last Alert System (ATLAS) online. ATLAS monitors roughly 28,000 asteroids in space and uses four telescopes to conduct a total scan of the entire night sky every 24 hours. ATLAS has spotted more than 700 near-Earth asteroids and 66 comets. Two asteroids (2018 LA and 2019 MO) hit the Earth in 2018 and 2019 without causing any damage.

With this cosmic mapping technology, NASA has estimated the potential trajectories of all the near-Earth objects beyond the end of this century. According to NASA, Earth faces no known danger from a catastrophic asteroid collision for at least the next 100 years. However, a “planet killer” asteroid named 2022 AP7 was discovered between Earth and Venus. The asteroid is about 0.9-mile-wide (1.5 kilometers) and is the largest potentially hazardous asteroid spotted in the past eight years. It is called a “planet killer” because it would cause devastation to the planet if it ever hit the Earth, like the one that took out the dinosaurs 66 million years ago. The National Science Foundation (NSF) made the announcement today based on a survey that was first published in The Astronomical Journal in September.

While there is no immediate threat from 2022 AP7, it is possible that “way down the line, in the next few thousand years, it could turn into a problem for our descendants,” according Alan Fitzsimmons, an astronomer at Queen’s University Belfast who was not involved with the study, in an interview with The New York Times.

[Related: What NASA’s successful DART mission means for the future of planetary defense.]

Astronomers are also hard at work building better planetary defenses. On September 26, NASA’s Double Asteroid Redirection Test (DART) mission successfully changed the orbit of a space rock for the first time. Before DART smashed into the asteroid Dimorphos, it took 11 hours and 55 minutes to circle its larger parent asteroid, Didymos. Data collected since the mission shows that the impact from the small spacecraft shortened Dimorphos’ orbit around Didymos by 32 minutes, with a margin of uncertainty of about plus or minus 2 minutes. Shortening an asteroid system’s trajectory like this could help us deflect a massive space rock if it were to threaten Earth.

The China National Space Administration (CNSA) is also in the early stages of trying its hand at asteroid deflection with a mission planned for 2025. CNSA plans to launch 23 Long March 5 rockets into Bennu, an asteroid weighing 85.5 million tons and would prove catastrophic if it ever collided with the Earth. Additionally, NASA’s OSIRIS-REx spacecraft collected samples from Bennu, that will return to Earth in September 2023. NASA’s Lucy spacecraft is exploring the Trojan asteroids near Jupiter. The Near-Earth Asteroid Scout (NEA Scout) is loaded into NASA’s new moon rocket awaiting liftoff as part of the Artemis I mission.