Plus one more you might be more familiar with. 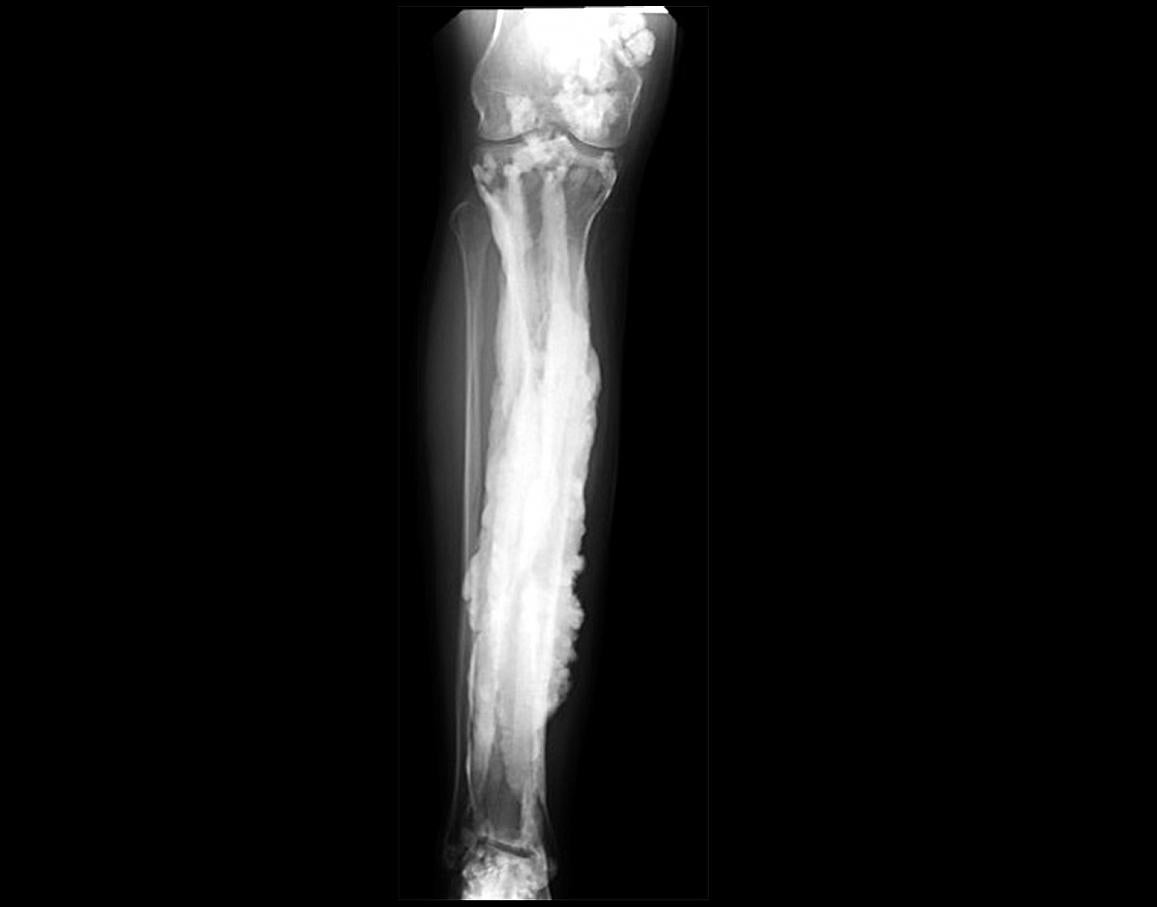 An x-ray of a patient with melorheostosis. NIH Image Gallery
SHARE

So when things go wrong with your bones, everything can become a mess. Beyond your basic fractures and hip replacements, there are some strange and unusual disorders that can manifest in your skeleton. We rounded up seven of the most interesting ones, from the extremely rare to the downright common.

“Dripping candle wax” is the classic descriptor applied to the x-rays of people with melorheostosis, a disorder where certain bones grow extra outer layers creating bulbous-like areas that resemble melting wax from a candle stick. The disease almost never affects both sides of the body equally, and is usually restricted to one part of the skeleton. It doesn’t even affect an individual bone evenly—the growths usually appear on only the right or the left side. Because of this unevenness, people with melorheostosis often end up with varying limb lengths, and the additional layers cause joint stiffness and pain.

Though this disorder’s long and complicated name makes it sound downright scary, the condition is actually pretty common (up to 12 percent of women have it) and benign—it’s a thickening of the inside of the frontal bone in your skull (the one that makes up your forehead). Usually it causes so few problems that it’s an incidental finding on an x-ray or MRI. Some people can get headaches from it, and more severe cases have caused memory issues, but the vast majority of people with Hyperostosis Frontalis Interna are asymptomatic. Strangely, though, the thickening has been associated with a wide number of conditions from obesity to thyroid problems to excessive hair growth (hypertrichosis), even though no one is clear on whether the bone thickening actually causes any of these issues.

Many forms of dwarfism exist, but the most common is known as achondroplasia. Though it can be hereditary, most people with achondroplastic dwarfism have no family history of it. Instead, it occurs through a random mutation in a gene for a protein called fibroblast growth factor receptor 3. Fibroblast growth receptors are a group of proteins that send signals for the body to grow, and FGFR3 specially plays a role in bone development. The mutations that cause achondroplasia mean that FGFR3 misfires, resulting in an abnormally small skeleton.

Brittle bone disease isn’t actually a single malady. It’s a group of disorders all relating to bones that break easily. The most common cause is a mutation in one of two collagen genes that results in a lack of type I collagen, a kind of structural protein that strengthens bones. Without it, you can end up not only with bones that fracture readily, but also with loose joints, curves in your spine, poor musculature, and a bluish tint in the whites of the eyes (without collagen, the underlying veins in the eyes show through). Though the actual mutations vary, osteogenesis imperfecta is generally an inherited disorder.

Though we think of bone as a hardened, somewhat dead thing, bone is actually a living, ever-changing part of your body. It’s constantly being rebuilt and repaired, and an important part of that process involves cells called osteoclasts resorbing bone, releasing the osseous material into the bloodstream as calcium and various minerals, to make way for new components. But if you don’t have properly functioning osteoclasts, you end up with a skeleton much denser than normal as cells progressively build up new bone while failing to take the old stuff away. All that extra material doesn’t make them stronger. Rather, osteopetrosis makes bones more likely to fracture, and the extra bone can impinge on nerves in such a way that it can lead to blindness, deafness, and facial paralysis. The hereditary type, called Albers-Schonberg disease, isn’t necessarily as severe, but it’s a dominant mutation and so is commonly passed down within families.

It’s one thing for bones to grow too much, but another entirely for bone to show up where it shouldn’t be. But that’s exactly what FOP is. It’s a connective tissue disorder caused by a random genetic mutation in which ligaments, tendons, and even muscles become ossified over time, though strangely it doesn’t happen in one slow, steady march. Flare ups occur in the form of swelling, often after catching a virus or getting an injury, and as the swelling subsides bone replaces whatever connective tissue is in the area. It starts during early childhood and affects the neck, back, arms, chest, and legs, and then eventually, it can move into other joints. The more bone that grows, the stiffer and more immobilized a person becomes.

Somewhat in opposition to the previous two disorders, vanishing bone disease does pretty much what its name implies: It vanishes your bones. No one is exactly sure what causes GSD, but it seems to be the result of an overactive lymphatic system. Normally, that system transports lymph—a fluid made up of proteins, fats, and a kind of white blood cell called lymphocytes—around the body, helping to rid it of cellular waste products. People with GSD end up with lymph vessels infiltrating their bones, breaking them down over time. Eventually the bone is replaced with fibrous connective tissue, resulting in all kinds of problems depending on which parts of the skeleton are affected.

Most of these disorders are exceedingly rare, but if anything that makes them even more fascinating—and will maybe even help you appreciate your skeleton even more.