People who need self-care the most aren’t getting it. Just ask a trucker.

Wellness is for everyone. 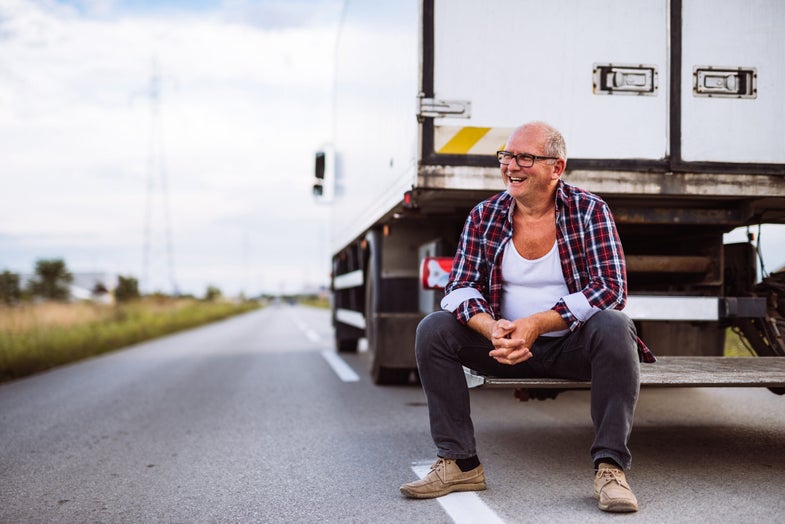 Handsome senior man sitting on the back side of his truck. Bernard Bodo
SHARE

Trucking wasn’t easy for Stephen Kane. Food along the highway isn’t exactly famous for its freshness, for starters. And the long hours (drivers can legally drive 14 hours a day) aren’t great for a body either, keeping folks sedentary and stressed. For 10 years, the industry supported him and his family, but it left its mark—and gave him a new mission.

“When I was driving, I was like, man, I wish I could invent something that tells me what to eat before I walk in,” Kane says. In October 2017, he realized his dream when his company, Rolling Strong, launched a mobile app designed to bring wellness practices out of the clinic and into the nation’s 33.8 million-odd commercial trucks.

Now, people who drive for Rolling Strong partner trucking companies can access highly specialized features, such as exercise videos that can be done in a cramped cab and, yes, a food recommendation system tied to geolocation. Launching the platform was a literal dream come true for Kane, but it hasn’t been without its challenges. Self-care has come slowly to the trucking industry, presenting an uphill battle for Rolling Strong. But, Kane says, something has to be done.

Right now, there are approximately 3.5 million truck drivers in the United States, and just as many in other trucking-related jobs like logistics, administration, and support services. Each year, these truckers move about 71 percent of the country’s freight. (The rest goes by other methods like airplanes and barges.)

Truckers cite numerous reasons for taking up driving, but there’s also a major downside to spending up to 14 hours at a stretch on the road: it isn’t great for your health. Long-haul truckers have a greater risk of chronic diseases like heart disease, diabetes, hypertension, and obesity than the average American worker, according to the U.S. Centers for Disease Control. There’s also the threat of injury. Tractor-truck drivers (that’s the technical term for semis) are at a three times greater risk of non-fatal injuries than average.

These problems make sense, given the life truckers lead. Living out of your highway-bound truck makes you all but dependent on fast food. Home cooked meals, which studies have shown are on average healthier than dishes you find when dining out, are hard to come by. Exercise, too, is a challenge when you’re driving all day and living in the cab of a semi. Of course, none of these problems is completely unmanageable, as apps like Rolling Strong prove. But it’s possible that the health risks associated with trucking have another source: gendered attitudes toward wellness and self-care.

As PopSci reported in a recent story on what self-care really means, public awareness of wellness and self-care has spiked, as people look to meditation, mindfulness, and similar practices to lead healthier and happier lives. But so far, the face of self-care has been overwhelmingly wealthy, white, and female. As a result, many people may feel left out and unable to practice basic self-care.

Right now, a whopping 95 percent of truckers are men. This same gender imbalance is true for just about every gig in the top 25 most dangerous jobs in America, which regularly includes trucking, logging, and steel working. But despite dominating such physically demanding and psychologically stressful industries, men are are less likely to seek help for mental health issues and more reluctant to visit a primary care provider. While few empirical studies exist on this topic, it appears men are also less likely to engage in wellness or self-care practices than women.

As a result, men are more likely than women to be diagnosed with late-stage cancers and live with diabetes that is undiagnosed and therefore unmanaged. While the factors that contribute to self-harm are complex, a resistance to mental health care may contribute to men committing suicide at a higher rate than women. All of this adds up to one final statistic: Men just don’t live as long as women do.

There’s certainly no silver bullet for this pernicious problem, but Rolling Strong has found a way to engage its app users. In addition to meal suggestions and fitness videos, they’ve also gamified their system. Truckers can compete to win in-app badges as well as real world prizes like Carhartt jackets by meeting their wellness goals. They can also tie their fitness goals to important events, like their regular trucking recertification, which is predicated on passing a physical.

Not every industry has a customized app that addresses its workers most pressing needs. But Rolling Strong and other efforts like it show that self-care is for everyone. It also serves as a reminder that the people most in need of self-care probably won’t get the support they need by scrolling through Instagram influencers.