This rare disorder leaves some people without kneecaps

But rare diseases don't get a lot of research funding 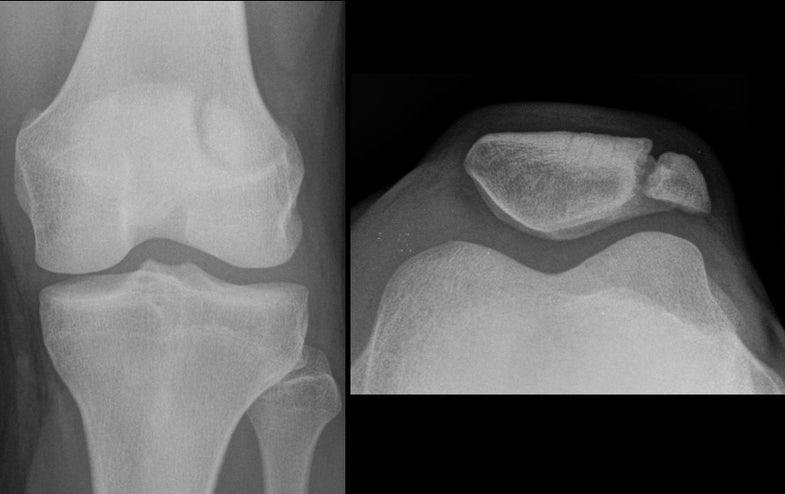 A patella, or kneecap, seen from the front and side of the leg. Wikipedia
SHARE

When Deanne Rue Stephens’s three children were born, the first thing she did was count her babies’ fingernails. What she found made her heart sink—on all three sets of hands, mostly empty nail beds.

Her daughter and two sons had inherited her rare genetic disorder: Nail Patella Syndrome, also known as HOOD Syndrome or Fong disease. People with NPS have some seemingly superficial issues, like few or no nails, and some bigger problems, like small or totally absent kneecaps—which can leave them with life-long orthopedic issues. The disorder can also cause significant damage to the kidneys and eyeballs.

NPS, which affects just 1 in 50,000 people, provides interesting insight into just how our bones develop—and what happens when that process goes awry.

NPS is one of 7,000 rare diseases in the United States, according to the National Organization for Rare Disorders. A rare disease is defined as affecting fewer than 1 in 200,000 Americans. Because so few people are affected by disorders like NPS, developing treatments and cures can be difficult, as time and money tend to be directed toward heart disease, cancer, and other leading killers in the United States. It makes sense that more common diseases get more attention, but advocates for patients with rare disorders are still trying to bring attention to these lesser known ailments through fundraising and campaigns like the annual Rare Disease Day, which falls this year on Feb. 28.

“It’s hard because our bodies didn’t form right,” says Deanne’s daughter, Emma Stephens, now age 20, about her family’s struggles with NPS. “So a lot of things are hidden that we didn’t know about… [O]ne day I realized, oh, the anatomy’s all wrong.”

When a fetus first starts to grow, it’s basically all cartilage, explains Dr. Vincent S. Mosca, an orthopedic surgeon at Seattle Children’s Hospital. So the earliest human form is more like a giant ear or nose—both of which are almost entirely cartilage—than the boney figures we eventually become.

Babies aren’t just blobs, though they often look it. As the fetus develops in utero, it starts to take on calcium to build bones. Kids come out with pretty robust arm and leg bones, among other basic scaffolding. But, as you may remember from elementary school science class, (or, more likely, books like “1,339 Quite Interesting Facts to Make Your Mouth Drop”) infants’ skulls aren’t completely fused—and their patellas are more like pebbles than the sturdy stones that anchor your legs.

It’s only around age three that our kneecaps starts to ossify. For Emma, members of her family, and many others with NPS, this never really happens.

NPS is an autosomally dominant trait, says Dr. Robert Marion of the Albert Einstein College of Medicine, so it only takes one parent with a mutation of the gene to pass on the syndrome to a child. If one parent has the mutation, there’s a 50-50 chance that each child will have the mutation, too. The mutation affects the gene’s ability to produce certain proteins that are essential to typical muscle development.

Neither of Deanne’s sons have visible kneecaps at all. Deanne and her daughter, however, did develop kneecaps as children, but they were small and improperly formed.

“I have full-sized kneecaps [but] mine were really misshaped and dislocated,” Emma says. Deanne’s meanwhile, were “the size of a dime,” which wore away at the joint and left her feeling stiff, unstable, and struggling to keep up her typical level of physical activity.

Deanne eventually had both of her kneecaps removed so they wouldn’t interfere with her routine. Without her kneecaps, Deanne couldn’t stabilize her quad muscles and even tore a muscle in her back trying to compensate for her weakened leg muscles. “She really learned how important the kneecap is to your anatomy,” Emma says.

And Emma developed her own problems: “One day all of the cartilage in both my knees shattered—broke off—because [my knees] had been rubbing on the bone.” She decided to undergo an experimental treatment where doctors regrew her cartilage in a lab and placed it back behind her kneecaps. It was a year-long process that involved five surgeries. She says the intervention worked, despite the difficulty, though some doctors continue to advise caution when considering such an intervention, given the treatment’s expense and a need for more research about its reliability.

“On the spin of the roulette wheel, we’ve really come out very healthy compared to a lot of other people,” Deanne says, because no one in the family has suffered from kidney damage or conjunctivitis. “[But] I won’t say I don’t have apprehension for my grandkids.”

Like other rare disorders that are physically draining but not usually life-threatening, the disease can be hard to identify and even harder to treat.

“So many diseases that affect the bones and joints have such variable expressivity,” says Mosca, the Seattle-based pediatrician. “There have been at least two situations where I diagnosed a child and the parent didn’t know they had it. A sister had it, a cousin had it … everyone had it, but some people just don’t know it.”

Cleidocranial dysostosis is a similar genetic disorder affecting the clavicles and teeth. Some people with the diagnosis have no collarbones at all or don’t develop permanent teeth, leaving them with just their “baby” teeth. It’s even more rare than NPS—affecting just one in a million, including Gaten Matarazzo of Stranger Things, who raises awareness about the condition.

But more and more researchers are realizing that the benefits of studies on NPS and other issues will extend beyond those who carry these mutations. “An understanding of these rare conditions can provide insight into the basis of much more common disorders,” says Marion. “So, presumably, a better understanding of the molecular basis of NPS will teach us about the biology of bones and joints [and hair and teeth and nails] and will be translatable to other, more common conditions.”

Taking the long view on their problems has given the Stephens family a lot of hope for the future. “I know [Emma’s] going to have those years of ability again—it’s just a matter of finding her the right help,” Deanne says.

Even though it’s sometimes been hard to manage her persistent pain and orthopedic problems, Emma says she’s just grateful she lives in an era where doctors can at least putting a name to her disorder. “My grandfather had it and his mother had it. I can’t imagine living back in my great-grandmother’s day, they had no research on it, they didn’t know what was wrong,” she says. “I’m so grateful for modern medicine.”

Perhaps not too long in the future, researchers will be able to treat—or even cure—NPS and other rare diseases.

For now, the key will be keeping the curiosity door open to new therapies and avenues of research.